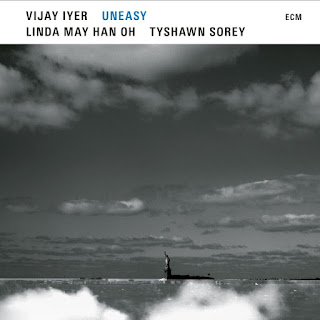 On Uneasy, his seventh album for ECM Records, Vijay Iyer presents an immensely powerful new trio, which he has formed with two outstanding musicians from New York’s jazz scene: bassist Linda May Han Oh, who is featured on an Iyer recording for the first time, and drummer Tyshawn Sorey, who was already part of Iyer’s superb sextet album Far From Over in 2017. Uneasy mainly consists of Iyer’s own compositions plus two cover versions - Cole Porter’s “Night and Day“ and Geri Allen’s “Drummer Boy“ - and was recorded in 2019. Actually though, Iyer started the recording process in 2010, which makes the album a sort of overlap, a new interpretation of past pieces brought to life again with a fresh group. In the liner notes, Iyer points out, mutatis mutandis, that back then the band named the album Uneasy in allusion to the uncertainties they sensed beneath the surface of things. It was their alias for an emerging unrest in American life. A decade later, as systems have shaken and crumbled, the word “uneasy“ seems like an ironic belittlement, almost inappropriate for these devastating times. But as the word contains its own opposite, perhaps it reminds people that the most soothing, healing music is often born of and located in deep unrest, and conversely, the most turbulent music can contain peace, balance and lust for life.

Some of the album’s original compositions are obviously about the humanitarian crisis in the US (“Children of Flint”), referring to the lead poisoning water scandal in Flint/Michigan, or civil rights (“Combat Breathing”). Iyer composed the latter after the death of Eric Garner in 2014, amid waves of protest linked to the Black Lives Matter movement. The 11-measure-structure refers to the eleven times Garner cried out “I Can’t Breathe“ in his dying moments. There has been an increased frequency of such events, lately culminating in George Floyd’s murder in 2020, which makes the piece even more relevant given these days’ social climate, as Tyshawn Sorey puts it. That’s why it’s possible to think about Uneasy as a form of re-focussing, a re-evaluation of found material or past experiences through music. As a conclusion, Vijay Iyer’s album is sociological, reflecting the turmoil that has shaken the US in recent years, from political instability to police violence to the precarious economic conditions of the pandemic. Iyer has translated this into music by an extreme forcefulness which drives the central pieces “Combat Breathing“ and “Uneasy“. After melancholic beginnings, the musicians virtually gallop through the compositions, Iyer’s runs are bubbling over exuberantly, his block chords pumping up the music so that it almost seems to burst. Before that happens, however, Tyshawn Sorey repeatedly sets rhythmic counterpoints, he stops his drum rolls with whip-like snare shots. Han Oh’s lyrical bass slides into the pauses with little melodies, but they are quickly recaptured by the seriousness and severity of Iyer’s piano playing.

However, there is more than restlessness and brooding despair running through Uneasy, namely simple beauty - and it shakes us in radical ways. It’s joy and it gives joy, it’s an expansion and enlargement of our being - both that of the musicians and that of the listeners. As mentioned before, there’s a certain terror inherent in the beauty of the music on Uneasy, for its perfection gives us pause, leaves us in a dizzying limbo. All it takes is a focus on the dabbed arpeggios in Iyer's solo interlude “Augury“, whose roughened harmony one might call unreal. Or the tenderness in “Entrustment“. This experience of beauty is in turn also political, for it makes us believe in a saved world spared from adversity, as if, far from all subjectivity, there was an experience superior to all intention. What is more, this can also be compared to the turbulent creative process Iyer describes as to the making of this album.

So, is Uneasy edgy and freely improvised? No. Is it excellent jazz? Absolutely. An early candidate for the album of the year.

Uneasy is available as a CD and on double vinyl (from May, 28th on).

The YouTube clip was marvelous--bright and buoyant. My favorite thing was the repeated image of Han Oh double shadow as she worked the bass.

Wonderful album. Interestingly, I think the cover image is one of the lesser abstract ones on an ECM recording.