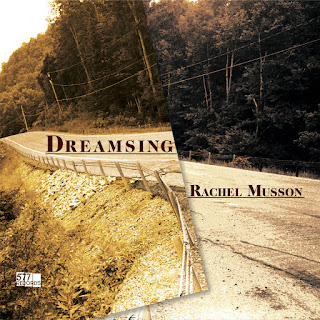 'Reeling' opens the album and is a wondrous excursion along a free improvisational highway of discovery. Musson's blowing is free, her embouchure loose and her interpretation of distinctive elements and changes profound. Musson circles and winds, rising to looping crescendos punctuated with murmured harmonics. There is a beautiful harshness to some of her entries but this is tempered with a delicacy at times which is on the point of being exquisite.

'Peurgh' is a delicious concoction with voiced slap tongue notes strung effortlessly together over the sax lines which emphasise the connection between the voice of the music and the voice of the player because you can hear both clearly. 'For Pauline' is a poem of voice and sax where the narrative is reflected in both tone and essence by the melodic lines and in the very first phrase you get that glorious double note intonation which only players who spend a majority of their time in tune with their instrument can achieve. The track flows between melodic episodes and screaming ones, and it is difficult to work out which interrupts which until there dawns the realisation that both come together to make this track engaging. The rapid keywork is impressive, as are the lovingly held notes at the end of phrases. Musson also knows how to work a silence which is something prevalent in mature musicians. 'Slip' is a short, sweet interlude whilst ' Trollo', also short, is reflective and gentle.'

'Meloose' is a sequence of phrases slotted together in ascension and takes the listener pleasantly towards the dream-like 'Twelveses' before ' Leavenses' adds a sweet, quieter touch. The last five tracks last just over a minute each but 'Slimpets' is almost twice as long at just under three minutes and there is time for Musson to develop several patterns, rhythmic trials and deep, gutsy rolls from the sax before the track winds and soars, the beautifully vibrant reedy notes tempered by the final long hold before 'Parakeet Pete' delivers a hailstorm of dropped clanging sounds and ear splitting woofs and warbles. Too short.

' Syncope' is delicate, experimental and the spoken words of a fall in blood pressure and some apparently random phrased add little here. However, 'Lighthousing', although short, makes up tenfold for this small diversion into confusion.

'Dotses' takes off in a series of spaced slap tongued notes before it develops into a more melodic piece while 'Slinks' is gentle, explorative and breathy. The final track ' Goodbyesing' is a glorious minute or so of sax flowing up from the depths into altisimo and beyond.

The album is mostly very short tracks with 'Reeling' and 'For Pauline' being the exceptions and there is a sense of incompleteness - mainly because there is a desire to hear much more.

Musson explores the aesthetic and tonal qualities of the saxophone , combining lush textural improvisations with spoken word prompts. Multiphonics and over blowing are sprinkled amongst the tracks like sweet toppings and you never know when they might emerge, along with wonderfully worked rivulets of sound which emerges at times with unexpected force. It makes the album a slightly uneasy listen, which works because you never lose awareness.

Recorded in London, Musson’s studio session for this album was scheduled at the very start of the pandemic last year, and the project is emblematic of that deeply uncertain era.

Dreamsing will be available digitally and on CD on May 21.