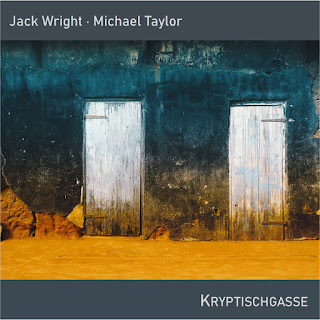 From the archives. Philadelphia, 2001. Jack Wright (alto & soprano saxophones) and Michael Taylor (upright bass). A chance meeting. In fact, their only meeting. No rehearsal, no plan.

What have we got here? From the first note to the last, an acoustic funbox for the free jazz fan. The range of tones, attacks, pacings, timbres, feelings, is extraordinary. (No electronics, no studio effects, just a really nice recording.) All improvised, the pieces never repeat themselves, just 23 minutes of playful goodness. From phrase to phrase, there are no themes, no motifs, nothing to hang your hat on. Just a spirited conversation in sound. Somehow it resists meandering. If there is a recognizable tic, sometimes Taylor’s bass echoes back Wright’s phrasing. What does it bring to mind besides Jack Wright’s own inimitable playing? It’s a tiny bit like a less grand, very stripped down, acoustic version of the scritch-scraw excitement of Evan Parker’s Electro-Acoustic Ensemble (see: The Moment’s Energy (ECM 2009)).

Kryptischgasse ( “cryptic road”) is an assertive but still gentle statement by both musicians. There is not an aggressive or angry bone in this body (maybe track 5's opening is on the brasher side, but that’s it). Nor is it weak-willed. Particularly the bass just sounds so good, like it should. Throughout is Jack Wright’s now familiar repertoire of bird-calls, partial lines, swinging, hesitations, flutters, tasteful squawking, altissimo singing, microtonal trilling, whimpering, quick soprano runs. If I had to pick a moment to emphasize, the arco bass against the punctuated mouth plucking on sax (track 3) is particularly affecting—but the main message is: The world of sound is so vibrant and so right there at your finger tips, let’s do it all, let abundance appear in its infinitude.

Philadelphia-based bassist Michael Taylor is perhaps less well- known than Wright. Some of his story in and out of music can be heard here.

Taylor is not strictly a free player (as evidenced here). He’s got chops, sensitivity and is able to communicate on the fly.

Jack Wright has been playing free for roughly 40 years, and has written a book (2017) that should be on everybody’s list, The Free Musics (available here). Free playing, in Wright’s words, arises from “the excess of desire that doesn’t know where to turn....It’s why no conditions can be given for its achievement, no idiomatic or aesthetic code can fulfill it, why it is the infinite game and the open field and cannot inform the world where it is going” (The Free Musics, 193). For Wright, music is principally a live event (which means ritually an aspect of humans gathering together in a place at a time; it is non-careerist, non-entrepreneurial, unpredictive and unpredictable (and also the opposite in just the way that humans are in every way trapped between past and future). This musical moment from 2001 is a message in a bottle we didn’t know we needed. It’s an enthralling recording.

For more on Wright’s views, check out the brief interview with Fotis Nikolakopoulos here.