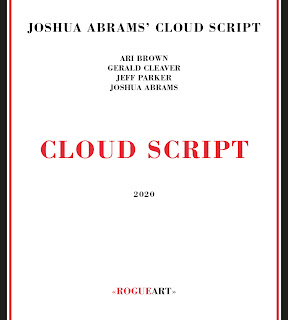 Warm, soulful, a titanic sense of balance—such qualities radiate from this album of bassist Joshua Abrams’ compositions. In addition to Abrams on double bass, the performing ensemble is comprised of saxophonist Ari Brown, guitarist Jeff Parker, and drummer Gerald Cleaver.

The individual resume of each member of this quartet boasts umpteen contributions to the works of other musicians, spanning musical genres and styles of encyclopedic proportions. Given the great talent documented over the decades-long careers of each artist on Cloud Script, it strikes me that their discographies are so heavily weighted toward appearances on recordings lead by other artists. Comparatively, each of them has only a handful of recordings where their name occurs as “lead artist,” and this to me communicates a shared character of generosity and mutual support that can be readily heard on Cloud Script.

Each artist absolutely shines on this recording—but none outshines, and their equipoise is simply striking. The group can build warm, sunny grooves just as well as they can plunge headlong into a lively, amorphous cloud of sound. Brown’s tenor sax voice is luxurious and bluesy, whether blending with Parker’s clean electric tone on the bright melody of “In Place of Memory,” or exploring a soulful improvision against the driving polyrhythms of Cleaver and Abrams during “Echo Tracer.” The latter tune, one of the album’s most boisterous, features Cleaver at a rolling boil throughout, yet with such sensitivity of dynamics that he’s always supporting group interplay and never drowning it. His performance in “Collapsing Novelty” similarly burns without incinerating, with Abrams offering inspired freneticism on both arco and pizzicato, and Parker becoming unhinged in a sumptuous sonic slurry.

Giving balance to the aforementioned vigor, the album also showcases a pair of gorgeously hushed tunes. “Duke Hill” begins and ends with a sweet melancholy full of open space, and a more tense middle part where all four explore fleeting strings and shards of sound. The album’s final tune, “Coniunctio,” first whispers and then gushes with slow-moving heartache. Brown offers a lovely solo full of emotion, and Abrams follows with a tenderly spirited statement of his own.

Abrams’ work in Natural Information Society is echoed in the track “Harbor.” It features a memorable melody which Abrams and Parker play in unison, circling and circling, while Cleaver and Brown occasionally venture out into inspired flourishes that color and shape the piece. The song casts an aura of wonderment, mirroring the impression left by the album as a whole. Across stylistically diverse narratives, the ensemble is beautifully balanced. Rarely does a single musician feel in the foreground. This degree of balance encourages the listener’s attention to distribute across each players’ performance, reveling in their combined creation.