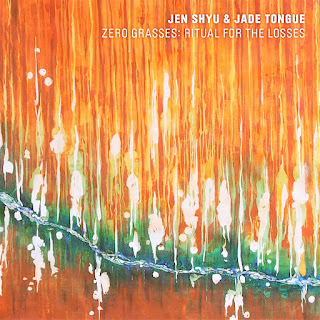 The way that I relate to Jen Shyu’s work has evolved. When I first listened some years ago, it eluded me. But the more I learn about what’s behind and inside the music she makes, the more curious I get, and the more incredible it becomes.

Zero Grasses began as a musical-theatrical work that was commissioned by John Zorn, and it premiered onstage in October 2019. Earlier in that year, Shyu was in Japan, had planned to be there for six months of research for Zero Grasses, but it was cut short when she was notified that her father had suddenly died. The album Zero Grasses is dedicated to him, as well as being “a mourning and reckoning for women and people of color, across time and into this pandemic” (album liner notes). After the pandemic struck, Shyu was moved to rework and re-record most of the songs that made it onto the album, entrusting a timeliness and urgency that also captures the renewed social demands for racial justice following numerous tragic events in the U.S. during 2020.

Zero Grasses: Ritual for the Losses is an album of resolute compositions—attending to “joy and anger, sorrow and happiness”—expressed through evocative improvisions. The pieces were composed by Shyu, and in addition to singing she plays piano, Taiwanese moon lute, Japanese biwa, and percussion. She performs with a deeply talented ensemble called Jade Tongue, comprised of Ambrose Akinmusire (trumpet), Mat Maneri (viola), Thomas Morgan (bass), and Dan Weiss (drums). While Shyu’s voice and lyrics are often the sonic focal point, they hang on a canvass of the ensemble’s creative instrumentation.

Throughout Zero Grasses, Shyu integrates a multitude of socio-cultural, historical, and personal influences of her art, all while giving a masterclass in vocal styles and techniques. She sings in at least five languages (of the ten she speaks). “Display Under the Moon” is a traditional Japanese song with Shyu on the biwa, a wooden lute which she plays with a piercing, aggressive string attack, like shots fired amidst the gentle exploratory tangle of the ensemble. Morgan’s bass playing has an unexpected and uncanny rapport with Shyu’s assertive biwa. Also, Shyu’s voice has an arresting quality and range—bold, then restrained, then raspy, then breaking. This is the longest track on the album, and positively avant garde in its execution.

To really appreciate this album, and much of Shyu’s music, it may be important to see her performing. Afterall, Zero Grasses was born from its greater theatrical work, and listening to the music without having any sense for the physicality and visual dimensions of Shyu’s art, significant aspects are missed—a bit like watching a movie with the mute on. At least for me, hearing and seeing her perform has been revealing. To get a sense, you might spend some time with this striking performance: Jen Shyu & Tyshawn Sorey - at The Stone, NYC - Aug 3 2014

Zero Grasses opens with a four-part suite titled “Living’s a Gift,” whose lyrics were authored by middle school students (Mimi Broderick’s choir students at MS 51William Alexander Middle School, Brooklyn, NY). Shyu captured their written reflections, which contrast the joys of springtime in 2020 with the concurrent sorrows of the pandemic, and offer us a glimpse into the adolescent mind struggling to make sense of it all and cope. Due to the pandemic, plans to record the middle school choir for the suite had to be scrapped, and instead Shyu multi-tracked her own voice to depict the themes of each part of the suite, including lush harmonies, call and response, mimicked sounds of nature, and polyrhythmic stops and starts. Throughout, the Jade Tongue ensemble plays with oceans of space. Akinmusire and Maneri dialog mournfully, Weiss colors with delicate brush and symbol work, and Morgan’s warm bass tones anchor everything.

“Lament for Breonna Taylor” remembers the Black medical worker killed by police in Kentucky in March 2020, an event that further fueled wide-scale demands and protests for racial justice in the U.S. The first half of the song is a hushed instrumental dirge, coalescing into a funeral march with Weiss’ subtle snare rolls, and culminating in a heartrending cry of voice, trumpet, and viola. Shyu sings the words of Ms. Taylor’s mother, adapted from interviews after her daughter was killed.

There’s so much happening on this album—I liken it to looking a massive multi-panel painting, where every space has something different, but equally compelling, going on. From the song lyrics sourced from disparate historical and cultural texts, to instrumentation and vocal styles that Shyu has honed during years of multinational research and study, to the mesmerizing conversation happening among the deeply talented improvisers—the listener really needs to take time with it all. I find that when I listen to this album, I can’t really be doing anything else. It demands my full attention. And judging by the kinds of recognition she’s received—the Guggenheim Fellowship, the Doris Duke Award, among others—her work deserves close listening.