We love solo bass albums, and it seems that they keep coming in great numbers. The overview below is indeed nothing more than that: an overview, a list that allows bass afficionados to be informed on new material and see what pleases them by clicking on the links. I think that I have not listened enough to each album to provide a star rating.

Needless to mention it, but several of the albums have been recorded during lockdown moments across the world, from Argentina over Portugal to the United States and the United Kingdom. 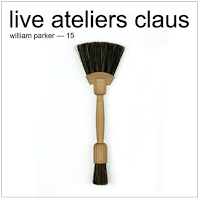 We will start with William Parker, who has already been very prolific lately. This album was recorded in June 2014 in the somewhat less known Ateliers Claus in Brussels, a concert venue with a very independent choice of artists in any genre or style. They have now started releasing albums with the strong recognisable visual approach (the photo of a tool against a white background).

Parker offers us two very long improvisations, one of 37 and the other of 28 minutes. The first is a surprisingly calm piece for plucked bass, and the occasional spontaneous emergence of a steady rhythm never lasts long. On the second piece he takes his bow, and the intensity increase as does the pace of the music.

Despite his huge output during his long career, William Parker has only released six solo albums, including this one: Testimony (1996), Lifting The Sanctions (1998), At Somewhere There (2010), Crumbling In The Shadows Is Fraulein Miller's Stale Cake (2011), Option Audio 005 (2018).

Even if the album does not add much to his catalogue musically, fans will surely want to check it out. 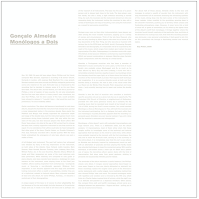 Portugese double bass player Gonçalo Almeida has been residing in Rotterdam for many years, performing with jazz musicians from both countries, and with lots of positive acclaim: Wilbert de Joode,  Martin van Duynhoven, Raoul van der Weide, Susana Santos Silva, Rodrigo Amado, Luis Vicente, to name just a few. He is also known from the very idiosyncratic music of bands like Albatre, Spinifex and Tetterapadequ, of which more can be found through our search engine.

This is his second solo album, after "Monologues Under Sea Level" (2015) presenting twelve improvised pieces of superb quality. His command on the instrument is strong as is his sense of keeping the listener's attention throughout the album. The title is called "Monologues for Two", suggesting that the artist and the instrument become one even if both have their own characteristics, equally suggesting that there should be a struggle or at least tension to make the two into one, although that does not really transpire through his music. 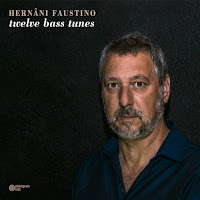 We know Hernâni Faustino probably best from the wonderful RED Trio and many other ensembles. Type his name in the search engine on our blog and you'd be suprised how many albums show up. Primarily self-taught, Faustino's has his own approach, combining a natural lyricism with an equally natural sense of creating anticipation. The twelve pieces he serves us are quite intimate, with such a good production quality that you feel real close to the music, as if he's playing next to you. The pieces are varied, with slowly built narratives revolving around silence (as in Pertença Do Gato Grande), more abrasive and exploratory tracks (as in Luar) or the dark Com Venus. One of Faustino's greatest strengths is his capacity to build tension in every piece.

This is his first solo album. 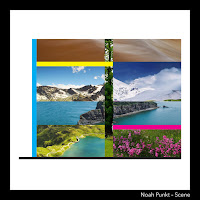 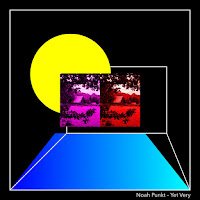 Noah Punkt is a Swiss avant-garde and jazz musician, active on double bass and programming. He has performed with musicians such Gerry Hemingway, Chris Pitsiokos, Christian Wolfarth, Bart Maris, Teun Verbruggen, Tim Daisy, Tobias Meier, Peter Van Huffel, Keefe Jackson, Tomeka Reed, Christoph Erb, Jacob Wick to name just a few.
"Scene" was recorded in Zürich between January and October of last year, so only partly affected by lockdown. "Yet Very" was released earlier this year. Both albums are of a completely different nature.
"Scene" offers twelve relatively short tracks, all titled with one word, and presenting us intense, minimalist and repetitive bowed pieces, all very close to each other in terms of concept and scope, even if on the last pieces, the mesmerising sound become more distorted and moves towards noise.
"Yet Very" consists of twelve tracks of each more than thirty minutes, each with a relatively long title. Interestingly, they're twelve renditions of the same musical piece, performed with minor variations. It will require some mental effort and energy to listen to it all in one go, but I don't think that was the artist's intention. 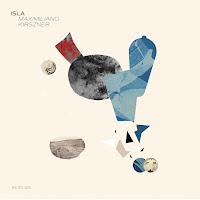 "Isla" is the first solo album by Argentinan double bassist Maximiliano Kirszner, originally classically trained, after which he studied jazz, and he graduated at the Manuel de Falla Superior Conservatory of Music in Buenos Aires. His recorded output is still limited, although he has played in several bepop ensembles, including a trio with trumpet player Enrique Norris and his own trio with Nataniel Edelman on piano and Fermín Merlo on drums.

The album's title reflects the isolation of the corona lockdown, making the artist confront his instrument and his musical legacy, delving deep into the sounds, harmonies, rhythmic possibilities and structures of the genres he's familiar with, bridging modern classical idioms, jazz and avant-garde together to explore fresh new possibilities. He is not shy to use extended techniques to in order to get there. On a deeper human level, the story is his own, his personal experience and introspection. 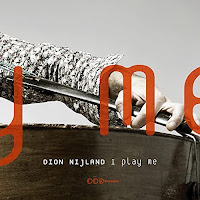 Dutch double-bass player Dion Nijland is less known internationally. He has played in various jazz ensembles in the Netherlands (Talking Cows, De Bende van Drie, Dimami, Vanbinsbergen Playstation, ...). This is first solo album, on which he offers us 19 pieces, some as short as 38 seconds, and the longest 3.19 minutes, presenting interesting ideas that were collected over the years. The upside of this approach is that there is a lot of variation and the pleasure of listening to a whole array of inventive concepts, including some very rhythmic parts with accompanied vocalisations. On the downside there is no real development of the ideas or the chance for the listener to be fully immersed and part of what's happening.

Listen and buy from the label. 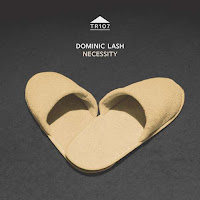 I know, we already paid nice attention to British double bass player Dominic Lash, but hey, why not one more? In contrast to Gonçalo Almeida's "Monologos A Dois", this album could be called "Dialogue For One" because out of the "necessity" of Covid-19, the bassist accompanies himself on acoustic guitar, using recordings, so this is not a solo bass album in the strictest sense. It is unclear what was recorded first: the bass or the guitar, but that does not really matter: Lash is enjoying himself, and sharing his joy with us in delayed relay. The album is dedicated to bassis Simon Fell and guitarist John Russell.

Listen and buy from the label. 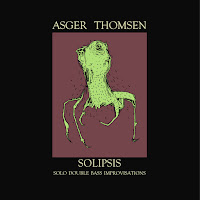 This is the third solo bass release by Danish bassist Asger Thomsen. We know him from his collaborations with Mia Dyberg on "Ticket!" (trio) and "Spejlrytme" (duo).

What he does on "Solipsis" is uncompromising and that he deserves credit for this. His music is a very physical exploration of the possible sounds of his instrument, including extended techniques, and this in a coherent way (as in the opposite of experimental sounds for the fun of coming up with unheard noises) to create musical narratives. He uses his instrument as it is on all tracks, except for "Samsa", the longest piece for which he prepared his instrument, allowing to have multilayered sounds and different sonic dynamics.

His music will not be to everyone's taste but you can only admire Thomsen's willingness to "go for it".

American bassist Nat Baldwin has made it a speciality to release solo bass albums, with his first one, called "Solo Contrabass", dating from 2003. His stylistic scope ranges from singer songwriter over folk rock to avant-garde. Some of his solo albums showcase his songs, accompanied only by his bass.

On the "Autonomia" trilogy, he takes his art deep into the minimalist avant-garde, reducing the sound of his instrument to repetitive, often monotonous and muted bows. His musical vision is quite singular and requires some effort to listen to. This will not be to everyone's taste, and that's a compliment.