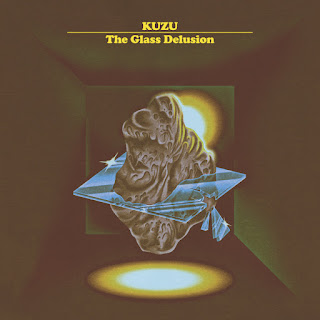 In her book In Praise of Risk, the French philosopher and psychotherapist Anne Dufourmantelle, who sadly passed away far too early in 2017, deals with the concept of suspense at a central point. For her, it means to hold your breath and to look with as much attention as possible at what is simply there, at what offers itself to you in the presence of things. According to her, suspension is not a standstill of time before the event, it’s the event itself. It’s the beginning of inner time, since the decision has in fact already been made, only no one has known it yet.

Compared to Kuzu’s latest album, The Glass Delusion, there are some interesting parallels. The band - Dave Rempis (saxophones), Tashi Dorji (guitar), Tyler Damon (drums) - feels its way forward with an idea of where the improvisation should go to, they stake out their field. In the process, the music resembles a conception that has become sound, that does not touch the ground and seems to refuse to take any direction. It’s perfectly open, it remains in an exciting uncertainty - for the musicians and the listener. Rempis and his colleagues seem to enjoy to dwell in this exciting position for as long as possible, because it forces them to remain tense for something unexpected that can happen at any moment. At the same time, it’s important to avoid prefabricated schemes, to stay as far away as possible from the big, worn-out gestures, answers and platitudes (as to Kuzu this would mean punk rock jazz). Rigid certainties must be avoided, though it’s still necessary to act. Yet, this state isn’t one of anxious or hesitant waiting. The music doesn’t have to point towards a goal, the state of suspension itself is the event.

The beginning of the first track “It Simply Becomes Jammed Part 1“ and the last track, “Gnash“, are perfect examples of this. They bookend the improvisation and the guitars flicker over single notes, the sounds pearl like shards of glass on the floor. The saxophone carefully feels its way from note to note as if it was lost in a timeless space, while the cymbal shots ricochet through the room and the drum brushes tremble like hummingbird wings. It’s like a sonic mirage in a desert. Yet, there is direction. Tyler Damon pushes the band relentlessly forward in “It Simply Becomes Jammed Part 1“, there’s a straight, irresistible rock groove. But it’s not the goal everyone is heading to, you’re rather reminded of a tense, exciting interlude. It’s the moment which is reminiscent of the former Kuzu albums - Purple Dark Opal, Hiljaisuus, and Lift To Drag. Here the band is as intense as usual, they are energetic, repetitive and straight into your face.

However, the real quality of this album is a different one. Compared to the Kuzu albums before The Glass Delusion the most self-reflective one. We get to know a different band, a tender one that displays the more sensitive and dramatic sides of their musical identity. Very surprising, very recommended.

The Glass Delusion is available on vinyl and a download.

It’s available from the label's website, where you can also listen to “It Simply Becomes Jammed Part 2“:

or from the Downtown Music Gallery.

Great review Martin. Encourages me to enjoy this release in a whole new way.