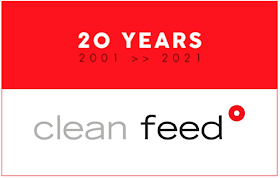 We write a lot about music and musicians, and we often forget about the people running the labels, the people behind the scenes, whose passion and persistence have given possibilities and opportunities to musicians who would otherwise be limited to performances in local clubs and concerts. Clean Feed has given international exposure to musicians around the world, musicians with a clear and stubborn vision on what music could sound, very often with ideas and approaches that could have sounded at first listens like commercial suicide.

The history of our Free Jazz Collective runs very parallel with Clean Feed Records - even if you're six years older. My first encounter with Clean Feed was through your album with the Nu Band, "Live At The Bop Shop". I am not sure how you managed to get this band for your second album, but it got me interested in your activities. I had a subscription on emusic.com at the time, and Clean Feed was available there: a real and cheap treasure trove for the music I liked.

In those 20 years, Clean Feed has released 616 albums, starting somewhat cautiously, with a few albums a year, and gradually expanding, as your reputation grew and your business as a result. When I type "Clean Feed" in our search engine, I get 525 results of posts mentioning your label (since 2007). That is around 10% of all the reviews written, of which 37 received a 5-star rating.

I am not sure which magic you used to get so many international artists to sign up with Clean Feed, but the list is very impressive and very long. You released new albums by the most forward thinking artists from the UK and especially the US (New York, Chicago, ...) : Paul Dunmall, Eddie Prévost, Gerry Hemingway, Kevin Norton, Wilber Morris, Whit Dickey, Joe Morris, Ivo Perelman, Ken Vandermark, Joe McPhee, Vinny Goliah, Charles Gayle, Julius Hemphill, Angelica Sanchez, Nate Wooley, Evan Parker, Rob Mazurek, Dennis Gonzalez, Kris Davis, Anthony Braxton ... a smart move. I think this international outreach put your label on the map from the start. For many artists your albums where my first introduction to them: Nate Wooley, Harris Eisenstadt, Christian Lillinger, Darren Johnston, Lisa Mezzacappa, Peter Van Huffel, Max Johnson, Miles Perkin, Zack Clarke, ... and many more.

Clean Feed quickly became the label to go to for new music. Wonderfully, and not surprisingly, you also knew and gave exposure to the incredible power of Portuguese jazz. You seemed to open a can of new artists every month: Rodrigo Amado, Luis Lopes, Sei Miguel, Hugo Antunes, Julio Resende, Gonçalo Almeida, Susana Santos Silva, Luis Vicente, Marcelo Dos Reis, Pedro Sousa, Gabriel Ferrandini, Carlos Bica, Rafael Toral, João Lencastre, Rodrigo Pinheiro, Hernani Faustino, Pedro Carneiro, Pedro Melo Alves, Hugo Carvalhais ... and I am forgetting many in the process. Without your label, who would have heard of them? How many hours of glorious music would we have missed? Now we hear them at concerts around Europe, and performing with other artists from around the world in various line-ups.

You expanded your horizon to France, the Nordics, Germany, Japan and selected the best of the best.

You - and possibly also some colleagues - have a wonderful ear for what might be new, a little bit left of center, great progressive music rooted in jazz, performed by less known musicians. I think of the WHO Trio,  Fight The Big Bull, Memorize The Sky, The Godforgottens, Lawnmower, The Ames Room, Balloni, Ballrogg, Roots Magic, Cortex, Snik, Lume, Albatre, Afterfall, ... Many of them were real discoveries, and several bands with artists from different countries and even musical backgrounds got into contact thanks to Clean Feed.

I am not sure how you do it, but I guess you must be listening a lot, travelling a lot, going to concerts, being open-minded for young musicians eager to get a place in your catalogue, an almost certain guarantee for exposure and hopefully success. You have a great ear for quality, regardless of the range of the music from modern jazz to more avant-garde weirdness - you rarely make mistakes. Not that I like everything, that would be impossible, but at least it is clear how the music somehow fits in your musical rationale, which finds a good balance between the stubborn musical vision of the artists and their commercial potential for the label. I also appreciate your production work, possibly even more unnoticed, because it is so good.

I know from conversations we had early on that it was hard to get to a break-even situation. I do not know your business model, and I know from many other progressive jazz labels how difficult it is to sustain the efforts, but I can only admire the persistence with which you continued, often against all odds. There is no need to explain, I am sure you must be profitable now, after all these years and with this immensely rich catalogue of music.

Then you went also a step further in 2012 with the launch of Shhpuma, the even more adventurous label, taking even more risks with avant-garde Portuguese music.

I will not list all the bands and music that you introduced me to. But I can tell you how much I enjoyed listening to bands such as Angles, RED Trio, Chamber 4, Tony Malaby's Tamarindo, Lama, Thomas Heberer's Clarino, Harris Eisenstadt's Canada Day, 4 Corners, Adam Lane's Full Throttle Orchestra... and all the others, how much joy they offered me, listening to those great sounds again and again. Would other labels have released all this music if Clean Feed had not existed? I doubt it. We would have received some things left and right, but definitely not this avalanche of great music, this consistent delivery of risky output, of carefully chosen and smartly released albums, this wonderful balance of known and unknown artists, regardless of their country of origin.

We met a few times, in Lisbon, in New York, in Belgium, and the meetings were always jovial, fun and interesting, but these few times pale in comparison with the hours, days, months - an estimated 600 hours to listen to all albums once - that I have actually listened to all the music you produced and released. You have been a significant part of my life in this way, strange as it may sound, despite the distance and the few meetings.

What you have achieved and what you have generously offered us all is exceptional. I want to congratulate you and your team with the 20th anniversary of Clean Feed, and I can only wish you continue on the track you have chosen. I know you will continue to surprise us.