This weekend, we celebrate Clean Feed's 20th year with a series of reviews from our writers focused on the recordings that have been released, so far, this year. We hope you enjoy reading and exploring new music from both some known and new names. So, in no particular order, let's begin! 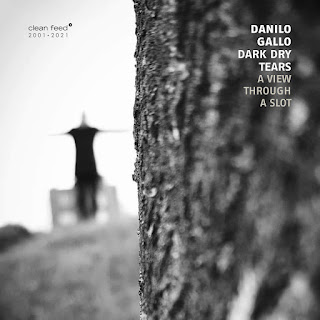 Make no mistake: this can be a jazz record, if you want it to be. Afterall, it’s got the improvisation, the personnel, the instrumentation, the spontaneously creative sensibility. But it also invites the listener in other directions, with many of the compositions bringing an impressive post-rock vibe to bear, streaked with distinctly experimental hues. Danilo Gallo wields his bass via wonderfully electrifying effects—moody, dark and brooding, declarative...and at times totally rocking! Jim Black is commanding on the drums, finessing the thunderous, the atmospheric, and the deft service of songcraft. Lorenzo Corti on guitar masterfully shapes the songs with a variety of boldly electric sounds, from jagged edges, to punchy grooves, to melodic loops, to amorphous shimmers. Two reedmen—Massimiliano Milesi on tenor and soprano saxophones, and Francesco Bigoni on tenor saxophone and clarinet—bring streams of energy and emotion to this music, and set sail much of the melodic content. They harmonize tenderly in one moment, while in the next wailing with feverish, brawny, sprawling solos when a crescendo comes calling. These songs begged me to latch onto their melodies, and seized my attention with surprising twists in mood, texture, and tempo. This is the kind of music that beckons you to turn it way, way up. And after enjoying A View Through a Slot, you can check out the ensemble's numerous prior recordings, as well as Danilo Gallo’s some 125 credited album contributions on Bandcamp. All compositions are by Gallo (except track #7 co-composed with Lorenzo Corti). I had a lot of fun spending time with this album! 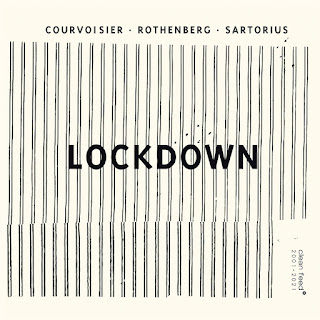 Sylvie Courvoisier and Ned Rothenberg have recorded before (see Clean Feed’s In Cahoots from 2017) but this is the initial offering from a trio that includes drummer Julian Sartorius. It is a notable album in or out of context with Covid-19 pandemic. It speaks to the times but transcends them as well. The release is engaging and provocative while maintaining a steady but unpredictable tones, arrangement, and rhythms.

“La Cigale '' opens with a maelstrom and it's like getting a bunch of records in one with the focus being that sweet Piano/ Sax/ Drums trio. Ah, the timelessness of freedom. Courvoisier uses all the piano as Sartorius uses all his kit and Rothenberg knows just what to pull out of his trick bag “After Lunch” has an in-the-moment vibe that conjures images of modern dance between my ears. It is emotive without being bombastic. “Popcorn” has a light but real strut, preen and honking. After a while, your kind of do not care who is doing what and just let the sounds morph into something unified. They coax music from their instruments that stirs the soul and keeps your ears on a swivel and a smile on your face.

This is what distinguishes Clean Feed. When I first started getting into Free Jazz I thought, Oh no, just atonal skronks! But Clean Feed is a label with range, passion, and fearlessness. One mark of a good album is inspiring the listener to seek out other recordings by its personnel. The same can be said of a label. Seeing the Clean Feed label assures me worthwhile music and ideas will follow and opens my ears and eyes for more from it. 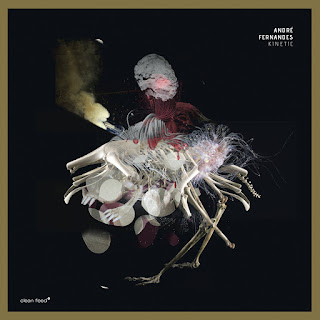 Kinetic begins with 'Atoms', a brief statement of spacey keyboard ambience. 'Wiccano' then kicks in with a driving set of piano chords, repeated and shifted through the scale until, unexpectedly, Sambeat and Fernandes seizes control and slow the momentum, giving Campos space and time for a series of beautiful, classical piano flourishes. The piece then roles to a silence, only for Campos to return to that original vamps played with early rock intensity. Sambeat rides atop; Pereria propels from below; Heliodoro adds a pervasive depth. Then, Fernandes shreds his way to the fore and completes the fusion.

'Wiccano' is just one composition, but it stands pars pro toto for what this album does so well. It twists and turns, takes brief, unexpected detours into modal jazz, then heavy fusion and space rock, then new music. It is vigorous prog but heavily inclined toward jazz, and melodic and rhythmic development comes in fits and spurts frequently layered atop each other. Some pieces, such as 'Futuro' build more incrementally and contain elements of contemporary classical. Others, such as 'Sadcess' are more straightforwardly jazz though with funereal and cosmic elements. This colorful variety comes from the numerous composers who penned the music: David Binney, Ohad Talmor, Akiko Pavolka, Sara Serpa, Perico Sambeat, Xan Campos. It also, however, comes from the musicians and, presumably, the mastermind Fernandes, himself, who imbue each of these pieces with their own vision of progressive stylistic blending. 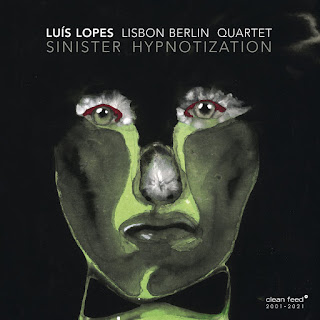 By Gregg Miller
Portuguese free guitarist Luís Lopes put out two records on Clean Feed as the Lisbon Berlin Trio, in 2011 and 2014, with drummer Christian Lillinger and bassist Robert Landfermann representing the Berlin axis. For this Quartet release they have added to the mix Rodrigo Pineiro on fender rhodes (also check out Pineiro’s piano work on the Red Trio with Nate Wooley, Stem (Clean Feed, 2012) – pure magic). The mood from the two Trio records is carried forward here, but the additional voice of Pineiro adds a certain density and unpredictability to the raucousness. The wonderful Trio records are full of patient, amplified bass scrapes and dead-of-night scary guitar clusters, sometimes with Lillinger throwing down a frenetic, forward beat to anchor the bass, letting the guitar free solo with Joe Morris type moving patterns. On the Quartet outing, we have less of a guitar record and more of a collective sonic statement.
What have we got here? A total free mash. Electric fuzz-distortion. Acoustic bass at times arco au natural, sometimes through pedals. Busy, busy, heavy within a narrow sonic range, a highway full of pitches blending into a wash. “Werther’s Memories” is the exception, a slower, spacious, sensitive piece. The record closes out, though, with a fire alarm. Throughout the drumming is notable for fitting in like an unpitched guitar. The record has the virtue of sounding completely crushed yet highly musical at the same time. The title track captures the magic of electric Miles but sets it free (meaning, groove without the hard groove). Brings to mind the first cut from Richard Bliwas’s Rising Rose Bakery (Rising Rose Records, 2011)– different instrumentation, but the same electrified, eclectic soup ethos. The liner notes underscore the dangerous politics of fascism still felt in Portugal and Germany. That angst cuts through sonically in this most excellent contribution to European forward jazz. 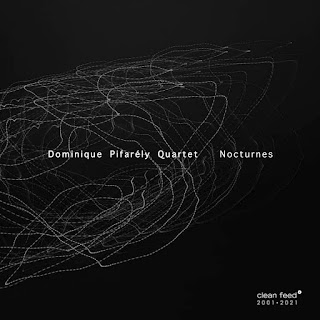 Dominique Pifarely Quartet’s Nocturnes is an album that appeals on a personal level in the context of Covid. The pandemic has opened my ears and mind to different sounds and styles and methods - instrumentation and arrangements and mélange - I’ll forgo the touchstones and antecedents - let’s live in the now.

The Clean Feed release documents Dominique Pifarély on violin, Antonin Rayon on piano, Bruno Chevillon handling double bass and François Merville at the drums. It works with the adage that something can be “greater than the sum of its parts” ...sort of. I will explain.

An album’s appeal is primarily the music but with ears also comes brains and imaginations. To see a recording as an aural document is fine but does a disservice to what the musicians are striving for as artists. That is not as hifalutin as it may sound. So, it is fun and engaging to take an album as parts of a whole as well as its entirety. Nocturnes clued me into this summation in not so easy or direct way. Pifarely et al make the listener work for the pay. As it should be.

'Nocturne 1' is a violin piano duet, spacious ECM tone, some spiky counterpoints to Pirafely’s considered flights then it just flits and floats away

'La nuit ravie, Pt.1' picks up a little deeper and nervous. But what is nice it is the similarity and distinction between violin and bowed bass. The drums enter tentatively, like much of the album artists, instruments and ideas interact. The production and arrangement are expansive and while a little dark it is also as alluring and mysterious as is it is inviting.

'La rumeur qui vient, Pt. 1' expands on the palette, digging in for a longer engagement than the first two ephemeral songs. Who knows how it was recorded but the sequencing is constructive and engaging as a couple minutes in we get the whole band locked in a nice groove as what was nebulous has gained substance and unity.

'La rumeur qui vient, Pt. 2' starts more contemplative but where the early songs were Pirafely and Rayon here Merville and Rayon play their drums and piano as if exploring a dark room, expanding time, and poking around in the shadows. Pirafely enters with a horn like tone, rapier sharp, incisive but not strident or distracting. The group builds up and the tune then coalesces into a beautiful, diaphanous moment.

'Nocturne 2' pickles up where 1 left off and hits some turbulence in its ascent until reaching cruising altitude.

'Nocturne 3' is another shorter piece with Chevillon’s bass squawking in a rough burr as Pirafely’s violin explore the range of its heart and soul. Again, time seems suspended but not static. No mean feat.

'Les ombres Pt. 1' feels like you flipped the record. Merville rumbles pithily on the drums as Rayon uses deliberate strokes on the piano all in support of Pirafely’s supple playing. The three have a percussive cadence that envelopes a lot of sound.

'Nocturne 4' is a wisp of a tune at 1’34” akin to tuning up. Pirafely juggles the arrangement between short and longer songs well without it seeming like a gimmick. It reinforces the organic nature of the session to my ears.

'La nuit ravie, Pt. 2' picks up where part 1 left off and serves to compel the listener deeper into the band’s soundscape.

'Ad augusta open' with Pirafely’s violin dancing like a blade on the skin, slightly scary and strangely alluring. Chevillon and Merville control the tempo deftly taking full advantage of the spotlight to enhance the music. When the quartet gels the play a nice straight-ahead section where Pirafely gets a nice full tone out his instrument.

'Les ombres Pt. 2' is more straight-ahead with a slightly languid Pirafely and a meandering Rayon. But even this cut has some well-placed squeals and scronks from Pirfaley’s violin

'Nocturne,' the bonus track, is a somber culmination that morphs into a field recording ambience illustrating how the band is not afraid going into the dark and turning the lights on.

Nocturnes encompasses a lot, there is a pointed fluidity to it all that makes the twelve tracks and 48 minutes seem to fly by and dig in, but I only realized and appreciated it depth and merit when listening with “beginner’s ears.” The release is deep art and a deep magic to this release. Listen repeatedly. For the first time.