Cologne-based, Austrian pianist Philip Zoubek integrates many fascinating sonic universes. You can find in his composed and free-improvised music echoes of the chamber jazz of Jimmy Giuffre, the free jazz of John Coltrane but also ideas coming from innovative, contemporary composers like John Cage, Iannis Xenakis and Gérard Grisey. Here are a few recent releases of the prolific Zoubek where he plays on the piano, prepared piano and synthesizer. 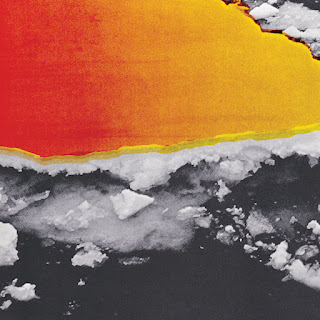 The unique instrumentation of this free-improv trio - fellow, Cologne-based tubist Carl Ludwig Hübsch also plays on various objects, Canadian, Montreal-based Pierre-Yves Martel on the rarely-heard viola da gamba, harmonica and pitch pipes and Zoubek on piano and synthesizer - defines its mysterious, almost transparent sound. This trio is an anomalous reconfiguration of chamber classicism but also suggests a patient, minimalist and almost static aesthetic, expanding and transforming the Morton Feldman-esque and AMM legacies. This trio began working in 2012 and Ize is its fourth album, recorded at the Loft Club in Cologne in November 2018. Hübsch and Zoubek collaborated before in several projects and Hübsch and Martel collaborated in another band Fleur de chaos, with Candian vocalist Joane Hétu and synthesizer player Émilie Mouchous (HMMH, Ambiances Magnétiques, 2019).

The five pieces emphasize that Hübsch, Martel and Zoubek are not only resourceful and imaginative improvisers. Naturally, they excel in the fine art of deep and sensitive listening, but all are well-versed in the art of spontaneous and instant composition, while keeping a delicate balance and organic fluidity. Together they create a mostly acoustic entity with minimalist electronic layers, subtly incisive, with a poetic collective entity, where the three musicians sound as extending each other’s palette of sounds. The static oscillations of “Any'' introduce the minimalist, reverberating aesthetics of this trio. The hypnotic vibrations of the dark “Kolt” echo the innovative work of John Tilbury. Hübsch, Martel and Zoubek turn their instruments to noisy, sonic objects on “Letik” and suggest an enigmatic-cinematic drone on “Bard”. Only the last piece ‘Kult” attempts to offer vivid contrasts between the dissonant, sparse piano chord of Zoubel and the quiet deep tones of Hübsch and Martel. A fascinating masterpiece, that is guaranteed to send you looking for more albums of these master improvisers. 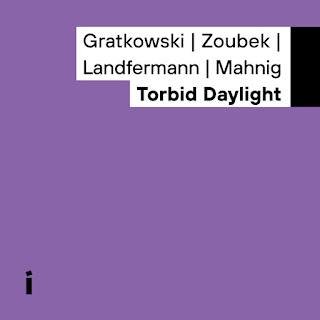 Zoubek plays the piano in a quartet with Berlin-based reed player Frank Gratkowski (who teaches in a conservatory in Cologne,  Zoubek and Gratkowski also collaborate in the quintet Shift), and fellow, Cologne-based, double bass player Robert Landfermann and drummer Dominik Mahnig (who also plays in Zoubek's Trio). The quartet has performed sporadically since 2016 and its debut album was recorded at the Loft club in Cologne in February 2020. This quartet borrows guitarist-producer T-Bone Burnett’s description of string theory to describe its art: “Beneath the subatomic particle level, there are fibers that vibrate at different intensities. Different frequencies. Like violin strings. The physicists say that the particles we are able to see are the notes of the strings vibrating beneath them. If string theory is correct, then music is not only the way our brains work, as the neuroscientists have shown, but also, it is what we are made of, what everything is made of. These are the stakes musicians are playing for”.

The interplay of this free-improv quartet is intense, even in its most sparse and contemplative pieces, and stresses the strong-minded personalities of Gratkowski, Zoubek, Landfermann and Mahnig. Gratkowski is the natural leader of the quartet, even though all the pieces are credited to the four musicians, and he often sets the uncompromising, energetic tone and uncompromising course of the pieces. But Zoubek, Landfermann and Mahnig are ready for this roller coaster challenge. Zoubek shines on “First Echo'', where he takes the quartet into a series of poetic and lyrical conversations. He balances Gratkowski’s furious and muscular energy with elegant and playful gestures, especially on the last piece, the explosive “Catalyst'' and the hidden, untitled piece, both demonstrate the strong, vibrating fibers that connect this quartet. 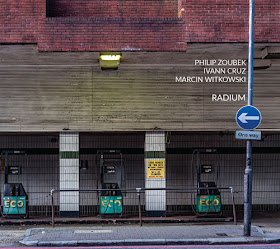 Zoubek plays here in another free-improv trio with French guitarist and electronics player Ivann Cruz, and Polish drummer and electronics player Marcin Witkowski, recorded at La Malterie in Lille, France, in December 2017. Radium is a meeting of prepared piano, primed guitar and extended drums, aimed at deconstructing the respective instruments in a search for challenging electro-acoustic ambient textures and unstable harmonies. Zoubek, Cruz and Witkowski are driven by the idea of building a meta instrument, an egoless creative process to open up new sound worlds and to explore uncharted musical territories.

Radium is the first opus of this trio, conceived after two years of working together. The sounds of the prepared piano, the effects-laden guitar and the prepared drums never cease to metamorphose or fade. Their inventive sonic palettes collide, bang, crackle, resonate and intertwine to seek a counterpoint of strings, skins and electronic sounds from which enigmatic harmonic landscapes and weird sounds and noises emerge. Each piece explores a distinct soundworld, moving from the rhythmic and suggestive to the atmospheric, from the urgent and energetic to the intriguing, symphonic drones, and from the sparse and the minimalist to the noisy and intense, mainly on the dark, sci-fi textures of “Tungsten” and “Lithium”. Then the piano, guitar and drum-set soar and lose their original syntax and vocabulary in favor of a new, brave one. 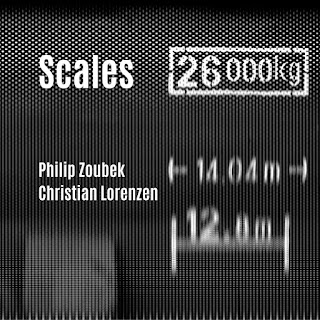 Zoubek collaborates here with fellow Cologne-based pianist Christian Lorenzen in a concert at the Loft in Cologne in May 2020 as part of piano duo series curated by Zoubek. Zoubek plays the piano and analog synth. Lorenzen plays a prepared piano connected with a modular synth, an electro-acoustic setup with contact loudspeakers that channeled the electronic sounds into Lorenzen’s acoustic grand piano. The album is released on Zoubek’s Bandcamp page. The two extended pieces, “57 Feet” and “247 Ohm”, are mysterious, carefully layered soundscapes of elusive percussive sounds, gentle ripples of acoustic piano alien, eerie sounds and subtle, noisy feedback loops. Surprisingly, this kind of highly nuanced but weird sounds blends organically. 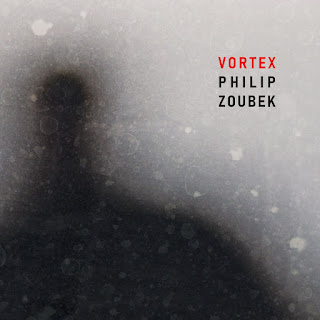 Zoubek plays on his solo album Vortex the prepared piano. He composed all pieces and recorded this album in December 2018 at the Loft club. This is the second solo album of Zoubek playing the prepared piano, following Air (WhyPlayJazz, 2014). The sonic palette of the prepared piano is manipulated with wooden objects, e-bows, rubber, and a variety of plastic and metal screws and transforms the acoustic piano into an exotic, futurist orchestra of fascinating, precisely layered sounds.

Zoubek’s prepared piano explores the full resonating characteristics of the keyboard, strings and wooden body and corresponds with far and traditional music legacies. Zoubek creates a vortex of cyclical-hypnotic soundscapes with a great sense of focus, coherence, and percussive force. Zoubek patiently exposes more percussive layers of the piano that becomes an abstract sound generator, and later finds more playful nuances throughout the percussive qualities of the prepared piano. There is also an enigmatic texture in Vortex, suggesting an ancient, meditative, ritual, and another texture that alternates between hymn-like segments and highly emotional elements. The last one travels to faraway, industrial galaxies. 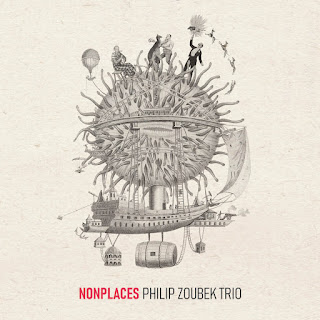 The sophomore album of Zoubek trio - Zoubek on piano and synthesizer, double bass player David Helm and drummer Dominik Mahnig, was recorded in December 2019. This trio experiments with new dynamics in the classic format of the piano trio. Often these dynamics may sound at first listening as diving into deep chaos, with its extreme, emotive twists and turns, but this trio executes its radical and complex vision with precision and clear joy, as well as constructive spontaneity.

Philip Zoubek envisioned Nonplaces as poetic, imaginary places that do not yet fit into the usual categories, or as a strange dream. The trio alternates between intense dynamics, and never settles on familiar narratives but maintains a coherent dramaturgy in which improvisation and composition exquisitely separate and combine. Zoubek, Helm and Mahnig sound as colliding with each other with fierce energy on the opening “Alarms” and the last piece, “Alarms Postlude”; searching for sparse yet mysterious sonic territories on “Mirrors”; deconstructing and re-construction the pulse on “Memento” and “Kran”; sketching balanced beauty on the ballads “Silver”, “Those” and “The Other Life”; enjoying a fast, comic interplay on “Gorilla” and “Mind at Play”, and always sounding fresh, restless and eager to expand its sonic envelope. 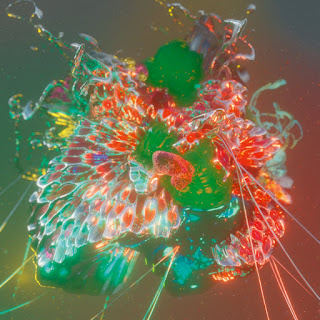 TAU5 is the Berlin-based electro-acoustic quintet. Zoubek focuses here on the synthesizer and plays with sax player Philip Gropper (who leads the PHILM quartet), bassist Petter Eldh (of Koma Saxo and Punkt.Vrt.Plastik), drummer Moritz Baumgärtner and electronics player-producer Ludwig Wandinger, who edited and mixed the original improvisations of Zoubek, Gropper, Eldh and Baumgärtner, conducted in 2015 and 2017. The reliance on electronic, manipulated and processed sounds and shifting, rhythmic patterns sends this band far away from the legacy of modern or free jazz bands, even the ones that have integrated electric instruments into their aesthetics, into the territories of prog-space-rock, post-rock, noise and even hip-hop and IDM territories. The focus here is not on composing melodies or clear narratives but on the elastic and transformative qualities of all sounds and how these sounds can be deconstructed and reconstructed into an uncompromising amalgam of new, weird sounds and complex and irregular rhythms. Or as TAU5 articulates its mission: “We send our blindfold signals / to a listener in dim Andromeda / We send out our folded signals / to the listener in all Andromeda / hoping for dreading response /Alpha rhythms delta rhythms / dark transmissions old as a sandstorm / wild as pop / beetween the communiques / another sleep-form new invented / toparies upwards outwards”.