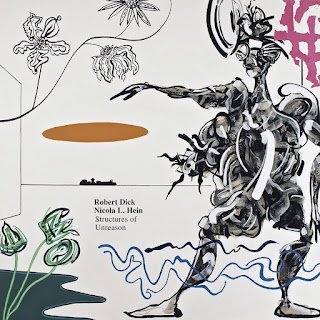 By Paul Acquaro
Nicola L. Hein often plays a well worn electric guitar with many pedals at his command. Looking the part of a serious philosopher, one may not expect the array of sound that emerges from his instrument. Or then again, why not? He lists sound artist first on his website, then guitarist and composer. His approach to the sculpting of sound finds good company with Robert Dick, whose own approach to his instrument is no less thoughtful and far reaching. Dick has a background in classical, world music, electronic and jazz and his playing is laced with extended techniques like vocalization and percussive use of the keys. He is also a writer, having published books on flute techniques and an inventor, having patented a unique mouthpiece for the instrument. So what happens when you get two engaged, intellectual and adventurous musicians together? You obviously get a pleasing set of standards. No, kidding (not that this wouldn't also be interesting). You get an engaging set of intellectually driven, adventurous music that spans from the enticing to the excruciating.
The first of the four tracks on the album begins with "Structures of Unreason, " a real tour of the possibilities of both instruments. The song begins with the rhythmic percussive clicks of Dick's flute's keypads and a sharp pulsations from Hein's guitar. Together the sound they create is exotic, unusual, and highly connected. Even when Dick begins playing full, legato notes, and Hein lets his tones linger longer, the rapport between the two musicians is strong. This is not a case of parallel play where unintentional consonances occur, rather this is highly interactive music, a true conversation but in highly personalized dialects. Listen to the kinetic and playful flute lines over the serrated metallic edges of the guitar at 4:40, which then leads into dark gurgling sounds that mimic the guitar. The opening of the track 'Benthic Elevator' contains an unusual moment where this is quite true: Hein releases slippery, wavering notes from his guitar while Dick bends notes as well (which goes back to his invented mouthpiece), the two are are in perfectly askew alignment. Hein in fact seems to approach his guitar more like an analog synthesizer, drawing out sounds that seem to have more in common with switching patches than striking strings. What is indeed happening at 2:55 on this track? There are the quick hammering tones, like a adderall-addicted woodpecker as well as strange warbles that are somehow coming out of six strings.
The sounds on Structures of Unreason are likely not ones that you will listen to repeatedly, they can sometimes be as harsh as they are fascinating, however, when you do take the time, plan to immerse yourself into a strangely seductive sound world. 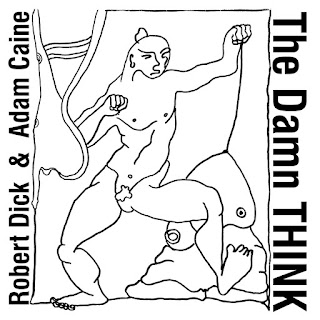 Robert Dick has been highlighted for his extended technique on the flute since the late 1980s. I remember -- probably accurately -- reading a piece about that in Wind Player magazine back then. And these techniques are, to be honest, the shiny object that draws your attention. But as the forty (40!) intervening years have shown, there is so much more. This is my first encounter with Adam Caine, Brooklyn based and apparently fearless improvisor, and, again to be honest, the shiny objects of his technique drew my attention. On this duet recording, Caine starts in what I think of as Eugene Chadbourne territory (a place I love), but then stretches out to embody a beguiling variety of guitar timbres, including rock electrics, noise of all sorts, and even areas that feel like electronica. The tracks here may have influences from wherever uber-eclectic people come, but the reason I'm digging it is because of the stories the two men tell. There's a unity to this complimentary and contrasting set of soundworlds, and the melodies, clusters, and timbres live within that unity. Their voices are confident, solid, and rich. They never seem to be thinning out or reaching for ideas. After a few minutes you move beyond the "how" of the music, and into the music itself.
Paul on Friday, July 16, 2021
Share