The improvised duet is a form with its own particular risks, liable to fall into the traditional pattern of melodic lead and accompaniment or, worse still, the instruments parroting one another in a kind of virtuoso mimicry. Fortunately, that doesn’t happen with these three distinct combinations. Each consists of two closely related instruments, and each strives for both a pointed layering and a detailed exploration of a special sonic combination, whether it’s a matter of locale or pitch range. Operating in different zones of free improvisation, each possesses a profound acuity to sound. 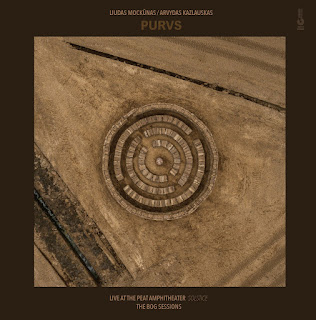 The most dramatic packaging and locales undoubtedly belong to the Lithuanians Mockūnas (playing sopranino, soprano, tenor, bass and keyless overtone saxophones) and Kazlauskas (on soprano, alto and baritone). The two LPs are presented in a gatefold jacket of stunning heft and a rich brown tone suggesting the earth itself dictated the presentation.

The first LP, The Bog Sessions, was recorded in a Latvian peat bog, the second, with audience, in a Peat Amphitheatre, constructed by artist Jānis Gutāns-Grasis and oriented to the path of the sun. The two sites serve as environmental and cultural stimulation, the peat bog both site of human sacrifice and preserver of human bodies and source of heat. The spongy material also emphasizes bass frequencies, giving special weight to the lower horns.

The journey into the peat bog may be considered a speculative study of resonance and material, but there’s also a lot more going on. “Taka” is a squall of alternating honks, sounding like a combative robotic dance (flesh into metal into flesh) in which the inhabitants of Doctor Moreau’s island and Metropolis ‒ animals, humans, robots or various interspecies and changelings ‒ have gotten together for doomsday. “Madla” sounds like Albert Ayler delivering a tenor sermon with Charles Tyler providing a baritone refrain.

Moving to the Peat Amphitheatre, the duo again explores multiple voices: “Turbs” is an extended duet that includes free lines in propulsive rhythmic unison; “Šmekla” emphasizes low-pitched plosives; “Zilās Sūnas” is intense, blues-driven free jazz. “Strāuwa” begins in the light metallic percussion of tapping on a saxophone or rapid fingering, likely without blowing through it; eventually becoming dense two-part music, one saxophone sounding like a flute recording played backwards. “Gyvatyne” begins as a kind of mad barnyard pecking at the edge of meaning, gradually evolving into a kind of strange trio, likely Kazlauskas playing baritone while Mockūnas plays soprano and sopranino simultaneously. 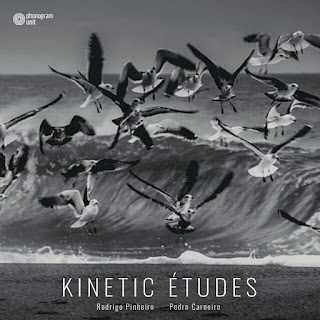 This Portuguese duo seems to explore landscape in a similar way, though the scale of their instruments ‒ Pinheiro’s grand piano and Carneiro’s marimba with quarter-tone extension ‒ confines them to a concert stage. Pinheiro may be best known for his role in Red Trio, the Lisbon-based group with a 13-year history that has recorded memorable collaborations with John Butcher and Nate Wooley, though his expressive range extends to noise-edged electric piano in Luis Lopes’ Lisbon Berlin Quartet. If Carneiro sounds like a classical virtuoso, it’s because he is, a distinguished performer and conductor who has been engaged with improvised music for at least a decade, performing in small groups with violinist Carlos Zingaro. Pinheiro’s grand piano is a wonder of resonance, but so too is Carneiro’s marimba, producing echoing pedal tones that reverberate around a room, and sometimes suggest the music of Harry Partch. Each musician improvises with a heightened precision, a refinement that might even suggest that they are reading, though no scores are apparent nor are there individual composition credits. Instead, the two move with a kind of natural fluency, ears wide open to the exchange, one’s phrase launching the other’s in music that often possesses an ecstatic flight and drift.

“Étude 4: On Impact and Orbit” (the titling emphasizes classical roots) might suggest Debussy and Scriabin, a wondrous marriage of the vague and the precise, an ideally blurred clarity in which the complexity of the flight is perfectly delineated, blurred only in the listener’s reception. “Étude 5: On Resistance and Mass” explores and contrasts the instruments’ sounds, Pinheiro’s almost arch clarity seemingly leading, while Carneiro’s liquid, low-pitched, reverberant sounds seem to burble up from oceanic depths until the two converge in near unison patterns, sounding like a single vast instrument occupying multiple elements. 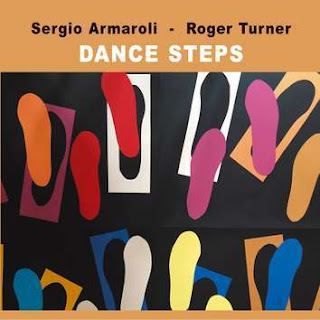 What Pinheiro and Carneiro do for low frequency wood and strings, Armaroli (prepared xylophone) and Turner (drums & percussion) do for high-pitched metal, their sounds often suggesting a metal that shatters like glass…continuously and of its own free will. If the previous recordings reference “free jazz” and “classical” music respectively, Armaroli and Turner may insist on the elusive “non-idiomatic improvisation”, somehow a category without analogues. However, their work, here and elsewhere, is rich in analogies. Armaroli’s recent recordings include the brilliant Deconstructing Monk in Africa (Dodicilune) with trombonist Giancarlo Schiaffini, on which Armaroli plays a broad range of African percussion. Here his xylophone manages to sound both whimsical and random. Turner, who brings a brilliant 50-year career in free improvisation to bear here, simultaneously emphasizes early jazz techniques, a narrow pitch spectrum emphasizing bright high sounds and astonishing rates of sonic event: he’s very fast, reminding one that the more profoundly engaged a music is in its instantaneous present, the harder it is to describe its passage through time.

The music begins with a sufficiently light fleetness to suggest the possibility of the Red Norvo trio (the one with Tal Farlow and Charles Mingus) playing a John Cage chance composition on 52nd Street 70 years ago. The analogy may seem extreme, but there‘s a kind of simultaneous attentiveness to the nanosecond and a special relationship to historical time, a rapid invocation and a quick erasure, reminding one that, in the 1940s, avant-garde dancer Merce Cunningham engaged New Orleans drum pioneer Baby Dodds for a duet performance. It’s all music of light (as if the sound of that breaking glass percussion came from light bulbs) from the brilliant play of “Rhumba Valley” to the underwater nocturne of “Charlotte’s Underwear Dance” and the distinctive mysteries of “Breath-In”.