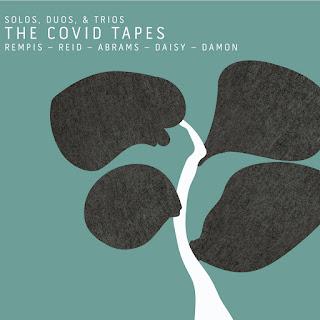 2020 was a bad experience for everyone. And if you were a musician you pretty much lost your gig. Recordings don't pay enough to sustain any of our outcat heroes – and they couldn't get together in a studio to record anyway due to the unpredictable nature of a potentially fatal virus wreaking havoc on all of humanity. We know what happened next; and although it wasn't ideal it was still great. We got to see things we never would have seen otherwise, most likely. Highlights of the online streaming concert experience included watching chickens walk on processed sound sources in Aaron Dilloway's house and getting up close and personal with Dave Rempis in his practice closet in the Unity Lutheran Church in Chicago. A new and different world wields new and different experiences – and streaming concerts helped soothe and/or stimulate most of us in a time of need - players, promoters and listeners alike.

For his solo closet sessions, Rempis got back to playing standards quite a bit. It appears that going back to one's roots happened frequently for people during 2020. I logged more time listening to the Stones, Velvets, Dylan and old blues records than I probably had in the last 20 years. There's comfort in them there grooves. It's where I came from. It's home. So it's not surprising that Dave dug up the old standards to cope with the new and shitty world that was being heaped upon us and repeatedly made worse by a U.S. government that mismanaged literally everything in sight – and that also doubled down on the incompetence with red-faced belligerence whenever it was called out. Good times. My sincerest best wishes for the people of Brazil and India, who are still in the heat of it all. What can we do other than throw money at the problem? This could become an entire essay that would take away from the matter at hand – but we are all unfocused as the US and Europe slowly open back up to something resembling “normalcy”. Everyone I know is stressed and questioning almost every aspect of their lives. The one thing I think we can all agree on is that we should never go back to the way things were before. We should use this time as an opportunity for positive change. We could do worse than to use the model of the streaming concert as an example of how to cope – and move forward. Sound naive? Then you weren't there. Beauty counts. Kindness counts. Musicians and venues brought it and we paid for the experience in kind. It benefited everyone who participated. We got through (most of) the pandemic together via computer screens, which as I said before isn't ideal, but it's what we had & it did the fucking job. Now if we could figure out a way for some of these folks to make a decent living from their art... Onward!

Where was I? Oh yeah, Rempis and standards. These solo pieces are an absolute joy. Joe McPhee's “Knox” kicks off the first disc with a succinct introduction to the approach he'll take on most of them: long, soulful, sometimes mournful tones that alternate with perfectly timed blasts of inspired freedom. “Just A Gigolo” is played slowly and sweetly. Legato – not at all punchy like Monk's version(s) but just as effective. Rempis says it's an appropriate tune for his online performance hustle. Not sure I agree as it feels more like a gift than a business transaction. He flutters his way through “On Green Dolphin Street” like he was born to play it, constantly flowing between melodicism and free ecstatic lines of ornithology. The closer for the entire double-disc set is Duke and Strayhorn's “Isfahan,” which shows Dave's apparent love of the melancholy standard in blazing lights. It's a stunner. He could have easily compiled a solo disc of these, but I think I like it better in this format: solo tracks alternating with group collaborations. Breaks everything up nicely.

The collaborative tracks here were recorded at Margate Park in Chicago, with the exception of “Toron” with Tim Daisy, which was laid down at the Sugar Maple in Milwaukee. “Toron” is a standout, beginning quietly as a bicycle wheel's spokes are struck with playing cards (not literally) accompanied by a wheezing threat. Rusty squeaks and junkyard pounding follow, building tension until Jazzbo the Snake Charmer shows up for a slow musical poem before the snake dances its way out the hat. And what a dance! Daisy matches Rempis' loping, fast lines with precision and fire. Rempis gets a solo spot in the middle that is inventive as hell, free as the blazing sun – then Tim re-enters swinging like Klook, the snare accents so infectious you can't help but move your feet. They kick back and forth between swinging bop and unhinged freedom like it's nothing – and it's incredibly exhilarating. The remaining collaborative tracks have more of a bootleg feel to them, which works incredibly well aesthetically. The outdoor setting lends itself to a flat sound, but is perfectly rounded out by the environmental sonics that inevitably slip into the recordings. The trio that Rempis has with Joshua Abrams and Tyler Damon on “Skin and Bones” sounds like a modernized version of the classic Sonny Rollins Trio to me – and I'm not exaggerating. Tomeka Reid and Abrams form automatic chords effortlessly on “In The Wild,” which Rempis weaves swift lines above – perhaps an homage to the birds present that day. Cicadas attempt to take over by the end of the piece, and there is a natural response from the musicians. “Glitch” is probably my favorite of the collabs and features percussion wunderkind Tyler Damon. He takes a nice long stretch to feel his way toward an addictive groove before Rempis joins in, with Damon adding incredibly interesting variations on the groove. Clyde Stubblefield and ecstatic Trane. Then suddenly there is calm. Long notes from Dave and wind chimes from Tyler. Builds to an interstellar storm, but more BYG than Impulse. The last several minutes barrel out like absolute best of the freedom sixties. Superb.