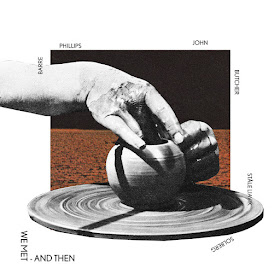 The wonderful thing about free improvisation is that musicians might assemble in a traditional format and then proceed to do something that seems unlike the tradition. Consider the tenor saxophone/ bass/ drums trio, a format employed by Sonny Rollins (Live at the Village Vanguard and Freedom Suite), John Coltrane (the quartet when McCoy Tyner dropped out ‒ “Chasin’ the Trane” or “Impressions”) and Albert Ayler ( Spiritual Unity and Prophecy) on some of the most memorable recordings of improvised music from 1958 to 1964, enough to make the tenor trio a classic format, extending to different sides of the tradition embodied in Joe Henderson’s Art of the Tenor or anything you might care to cite by the Parker ‒ Guy ‒ Lytton trio.

We Met – and Then might seem to break with the few commonalities of those recordings. While Phillips and Solberg play “time,” it might seem far from the metrics (swinging, polyrhythmic, implied) heard above. It’s time as grain, time as suspension, time as interruption or corroboration of an infinite movement, but then, time in any of those significant precedents is always complex, multiple, not something to be checked for consistency but rather its own plurality as well. The distinction may be the extent to which this music reflects the slowness of the passage of time, the gradually emergent equivalence of voices, the tone as drone, the harmonic as window, the deconstructed and disintegrated line. Heard here consistently is an expanding sense of the possibilities of individual voice and timbre, including closeness, something continued here in that sense of harmonics as transparencies. The line is a collective invention, individual sonic events that are also, somehow, a conversation, a soundscape.

The first 34 minutes come from a 2019 Oslo performance. It’s the more intense of the two contributing performances, especially in the long opening title track, the three achieving mystery as well as confluence. There’s a mimetic possibility here, a welcoming of birds, voles, other creatures. In the sightless world of the CD, we’re returned (repeatedly) to the art of the cave, the flickering of sound and the immediate call for attention, whether identification or curiosity, caution or reward. Solberg’s role is central here, often as the measure of space, but also continuously turning his drum strokes into the narrowest of melodies, insisting on the significance of inflected pitch shifts.

But then (that word itself the anticipation of the future in the past), Phillips is that rare musician who spans creative generations (it’s a gift to, of, from bassists, apparently, consider Reggie Workman as well, and the special durability of Henry Grimes, Richard Davis and Cecil McBee) Phillips a messenger from that past previously alluded to, sign of the persistence of creativity (consider the recent solo recordings End to End and Thirty Years in Between, the latter taped at Victoriaville, between the two sets represented here) from recordings with Jimmy Giuffre and Archie Shepp to now.

The final 20 minutes come from a 2018 Munich concert with more emphasis on the group’s components than the totality. The initial “Travelling” is a Phillips’ solo, the same kind of graceful, melodic resonant reflection apparent on his solo discs, sounds sometimes swelling in volume as well as meaning after they’re plucked. The duo of Butcher and Slavik is more insistently ancient, ceremonial. The final piece, “We Met”, is, then, both the conclusion of the CD program and the earliest trio piece heard here, already meaningful, the three playing micro phrases, a pedal tone, a glissando, a wisp of melody, finding their way into one another’s sounds, processes and vocabularies, establishing identities and presences, all with the sense of sacrifice and growth within the possibilities of the encounter.