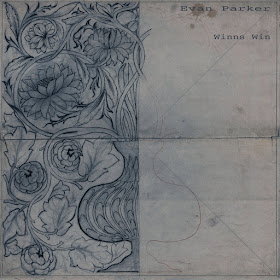 I recently read about Evan Parker’s encounter with pianist Charles Farrell, in the book, A Memoir of Jazz, Fight-Fixing and The Mob written by Farrell, where he describes playing with Parker on two memorable occasions. I last saw Parker play at The Vortex jazz Club in London with John Edwards on double bass and John Russell on guitar and this was also memorable. His playing has lost none of his visceral approach, outlandish phrasing and dramatic changes during his decades of playing and he remains an influential saxophone player with good reason. On Winn Win, Parker has recorded music inspired by the designer and activist, William Morris. It was recorded at Morris’ home in Walthamstow, London, which now houses the William Morris Gallery.

The working title for the album was 'Barbarism Once More', taken from a longer quotation from Morris, which reflects the passion, spontaneity and iconoclastic nature of Evan's playing. After Russell’s death the album was re-named because of Russell’s home on Winns Avenue, Walthamstow, next to the gallery. Evan decided to offer a tribute to Russell, naming the album ‘Winns Win’. The album consists of nine spontaneous compositions that are very intense, yet also offer melodic phrasing which adds richness and depth to the content.

Parker uses pattern and repetition to reflect Morris designs and ‘Winns Win’ is a musical experience which brings the saxophone up close and personal. The album release date of 1st October coincides with the 125th anniversary of Morris's Death (3 October 1896). The original artwork is ‘Design for Flowerpot Embroidery’ (designed c.1876) by William Morris, with additional design by Oliver Bancroft.

‘WW1’ builds from a delicate start to an intense, spirited and vibrant number with repeats, loops and swirls of phrasing which spin in never decreasing velocity until the final phrase which drops to a single note and a delicate flourish.

‘WW2’ continues the theme of repetition but is tempered with a rise and fall with variations in the intensity and phrasing, interrupted only by Parker’s essential need to draw breath. The middle section dips lower, with a rhythm change before it rises to the repeated motif again – and again. At times the notes are so smoothly melded the sax takes on the essence of a stringed instrument played arco. By the 4.30 minute mark the intensity has risen to fever pitch and the wonder is that Parker’s fingers seem to not miss a key.

‘WW3’ is a gentler, delicate variation and melodic phrases are tempered by the crazy-fast patterns Parker weaves into the fabric of the number. Using intricate techniques and forceful, yet somehow restrained phrasing, Parker delivers a number full of texture, balance and colour.

‘WW4’ is atmospheric, winsome and holds a mysterious quality, enhanced by the way Parker allows the phrases to hover, the notes just discernible as individual entities whilst the second half holds phrases with extended notes which add emotive touches to the energy infused number.

‘WW5’ is just one minute forty-five seconds and feels as if it is the introduction to a longer study, the reedy repeats on very few notes, each phrase begun with a startling slap-tongued ‘blat’ before relatively gentle phrases provide thoughtful interludes. ‘WW6’ makes up for the short number preceding it by delivering over eight minutes of explorative and evocative music. Musical ideas fly in and out, phrases repeated, are abandoned and return. The track is, at times, uneasy listening and at others sublime.

‘WW7’ contains soaring phrases contrasted with slower, pulled interludes where Parker creates a sense of leaning into the phrasing. The energy here is mind-boggling and the moving between keys and registers interesting, particularly in the middle section when Parker introduces shapes to the phrasing with warps to rises and falls.

‘WW8’ begins with a high treble motif which is repeated and developed, growing more melodic with intricacies added to and around the pattern, which grows in intensity and rapidity, while ‘WW9’ which closes out the album is short, palpably sweet, with stut notes, slap tongue and rolling, intricate phrases all captured in its just over one minute’s length.

This album is fitting as a tribute both to Morris and the incredible talent of John Russell, who was Parker’s friend as well as musical companion. John Edward told me that as a trio, the three – Parker, himself and Russell, understood each other and caught each other on stage. Here, Parker on his own is outstanding as a player. The patterns and colour woven into the fabric of the music in their sometimes outlandish but relevant manner offer tribute to Morris too. The spatial quality of some of the phrases also imparts reference to Morris’ fantasy writings. There is familiarity in the tracks which demonstrate the mindset and place of the musician at the time of recording perhaps but there is more to be heard with each listen of the tracks and this album has an intensity reflective of the power of Parker and his music.