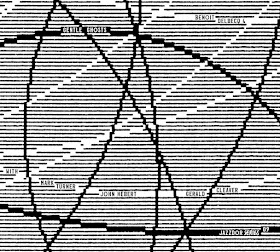 Some music grabs me by the shirt collar, seizing my attention and refusing to let go, perhaps with an irresistible melody, or an infectious groove. Other music accosts me with a melee of sonic projectiles, bombing and blasting, daring me to search for something stable to grab onto. And still other music extends me an invitation to consider entering a space containing a wide variety of phenomena—details that can be appreciated from a distance, or curiously examined up close, or anything in between. To my ear, this album of quaintly intricate tunes mostly inhabits the lattermost description. (Of course, there’s also music that achieves all the above and more, praise be!)

The performing ensemble on Gentle Ghosts (Jazzdor Series, 2021) is led by Benoît Delbecq, who wrote all compositions, plays piano and prepared piano, and simultaneously contributes real-time electronic feedback through a fascinating process he terms “post-radiophonic.” Mark Turner plays tenor saxophone, and has been in Delbecq’s ensembles since at least 2003. Gerald Cleaver plays drums and John Hébert plays bass, with whom Delbecq has played on two excellent albums as the John Hébert trio. These four artists’ prior recording was the wonderful Spots on Stripes (Clean Feed, 2018).

On the heels of The Weight of Light (Pyroclastic, 2021), Delbecq’s remarkably creative solo effort from earlier this year, his Gentle Ghosts album endeavors further innovation—the aforementioned “post-radiophonic.” It involves a software that records each performer and permits Delbecq to immediately playback fragments of an individual statement, or of the entire ensemble. The feedback is often quieter, rather in the background, and processed with subtle effects that can give it a bent translucence, like a playful phantasm. During the recording, each musician hears and spontaneously responds to periodic intervals of feedback that Delbecq initiates. The video “album teaser” gives a good sense for how this shapes the musical interplay.

To my ears, one of the finest tracks is “Gentle Ghosts.” Delbecq’s undulating piano work is pensive, gorgeous, as he duets with slightly refracted apparitions of his playing (i.e., post-radiophonic). Turner’s sax brings a warm and slightly bluesy glow, and a current of nostalgia swirls in the mix that is persistently unsettled by rhythms that stumble gracefully and chords that fray at the edges. Hébert culls just a few choice notes that hang in the air, and Cleaver’s rustling brushwork casts a deep hush.

In the film about the making of The Weight of Light, Delbecq offers insight about his music: “The ‘let me show you my emotion in art’ aspect is not so interesting for me in music. I’m interested in others doing that, in peers doing that. But that’s not my method. I prefer to conceive states that may be luminous, showing a music that has a certain type of illumination, into which one will be able to dive—and I leave the choice of emotion to the listener.” Indeed, Delbecq’s style on the piano can be clinical, or playful, or impressionistic, but it rarely feels like it nudges the listener in a particular emotional direction. To my ear, Turner shares some of these qualities, but when paired with Delbecq’s piano, his tone reveals bits of emotional valence, occasionally wistful. Indeed, Delbecq’s playing, which can be beautifully spare, on this recording is injected with a good deal more energy and fullness, courtesy of the measured drive and dynamism brought by drums, bass, and sax.

Three of this album’s compositions also appear on The Weight of Light, and it's interesting to compare versions. In the case of “Anamorphoses,” the theme is charming, almost Monk-ian, but the spare and even monastic feel of the solo version has become a jaunty swinger in the hands of the quartet. With “Chemin sur le Crest,” the solo version offers the slightly tense theme with a completely decentered sense of rhythm, while the quartet version gives the tune’s pace a pliable yet firm drive, even while the sax and piano explore the theme with a contrasting oblique rhythm. This tune has some colorful “post-radiophonic” shading that sometimes blends indistinguishably with its original utterances just moments earlier, like the edges of a mirage slowly revealing what’s actually there.

All the songs on this album hang together well, similarly inhabiting the unique sound of this ensemble—curiously sweet, playfully elusive, with an understated serenity that invites introspection. What do you think?