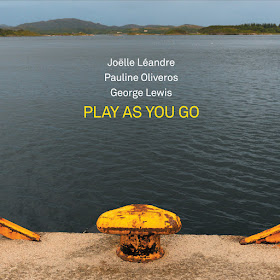 French double bass master Joëlle Léandre and American accordionist and electronics player Pauline Oliveros and electronics player and trombonist George Lewis are great pioneers of free and experimental music on both sides of the Atlantic, influential thinkers and role models and inspiring educators. Play As You Go is the only recording of these three masters sharing the same stage, captured by the national Czech radio station during the festival VS. Interpretation in Prague in July 2014.

But these musicians have known each other since the early eighties. Léandre first met Oliveros in New York when she was performing British-American composer Bernard Rands’ “Memo 1” for solo double bass, and later played with her in festivals all over Europe. In 2002, Oliveros and Fred Frith invited Léandre to be a visiting professor, teaching improvisation and composition at the Mills College in Oakland. This cooperation led to the recording of The Space Between (482 Music, 2003, with shakuhachi player Philip Gelb and pianist Dana Reason). Léandre first recorded with Lewis in 1982, as a free-improv quartet with Derek Bailey and Evan Parker, 28 Rue Dunois Juillet 1982 (Fou, 2014). Two years later Lewis invited Léandre to record his seminal composition Rainbow Family with Bailey, Steve Lacy and Douglas Ewart (Carrier, 2020), and throughout the eighties, they continued to collaborate with outfits led by Irène Schweizer and Anthony Braxton. Their last collaboration as a duo was recorded at the 2008 edition of the Vision Festival, Transatlantic Visions (RogueArt, 2009).

Play As You Go accumulates decades of experience in improvising and spontaneously composing at the moment. Obviously, and as sax player and scholar Tracy McMullen mentions in her insightful liner notes, deep listening, sonic awareness are essential for such a meeting, or as Oliveros taught us: full attention and openness to another, another which is sound, includes the sound that you make. Deep listening demonstrates that we can conceive of our relationship to the other not in terms of being recognized, but in terms of generous giving. Lewis adds to Oliveros Buddhist-tinged concepts the idea that we can live in an ever-present now and this idea denies the reality of history and the habits and momentum that shape our racist, sexist, capitalist present, and this leads to a resistance to accept the dualisms of the West. Our practice is to perceive things clearly, respond appropriately (that is ethical, born out of clear-perception) and to understand the biggest picture: that the ignorance of the world is not the world. Léandre wraps these notions in a simpler way: have fun and love each other. Then, at a certain point, we may find ourselves in a space where no instruction is needed, no remembering is needed.

Play As You Go offers 44 magical minutes. This piece draws you immediately into a colorful, almost psychedelic and spiritual sonic adventure that has its very own timeless logic and highly expressive language. It may sound at first as a secretive, exotic language that only Léandre, Oliveros and Lewis share but very soon you may feel quite proficient in their coded, layered messages, imaginative but refined dialects and fascinating nuances. Eventually, you will feel that these generous listeners-improvisers see you - the listener - as an integral part of their journey, and want to share with you the deep joys of celebrating being in the moment, a moment that holds at once all of our past and all of our future. An emotional and poetic moment that goes beyond the dichotomy of free and not free, acoustic vs. electronics, or improvised vs, composed. For a brief 44 minutes Léandre, Oliveros and Lewis become one with the music, sharing and enriching each other’s ideas and making it bigger than themselves, feeling the rare elation of reaching such close and profound understanding, but not taking themselves too seriously, and insist on having fun.