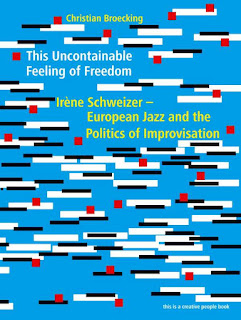 For her 75th birthday, the music department of the Lucerne University and the Broecking Verlag published a comprehensive biography of jazz pianist Irène Schweizer. Now, five years later, the English version of the book has been released, translated by trombonist Jeb Bishop.

In this detailed biography Schweizer is honored not only as a central figure in the development of European free jazz, but also as a committed pioneer for the equality of women in art and society. In her early years, for example, she stood up for the artistic and economic autonomy of artists and fought against discrimination against people on the basis of gender, origin or sexual orientation. The German critic Christian Broecking, who sadly passed away this year, has created an elaborate, diligent work with lots of case studies. What is more, the book consists of many interviews with Schweizer and over 60 contemporary witnesses, which turn out to be insightful as to her life's work.

Chronologically, the biography begins with Schweizer’s youth. She grew up in a pub owner’s family in Schaffhausen and after her first attempts on the accordion she discovered the piano and joined the Crazy Stokers, a Dixieland band, at the age of 16. In 1957, that alone was a sensation. Shortly after that she landed in the top ranks at the Zurich Amateur Jazz Festival playing soul jazz and hardbop. The prize was a man’s shirt and a pack of cigarettes - no one could imagine that a woman would be able to win the first prize.

A little later, Schweizer attended a language school in Great Britain, where she immersed herself in the London jazz scene (mainly Ronnie Scott’s club), before returning to Zurich. At the "Africana" jazz club she met drummer Mani Neumeier and bassist Uli Trepte, who also formed her first trio. When the two men converted to rock music in 1968 and formed the underground band Guru Guru, Schweizer’s long-time collaboration with drummer Pierre Favre began. Their music sounded increasingly wild and free, which earned the pianist invitations to the Total Music Meeting in Berlin - the annual pilgrimage site for free jazz fans. As a woman, however, she was on her own and had to assert herself against the male alpha dogs, which resulted in her more playful, sensitive style. Since that time Schweizer has been a regular guest on the avant-garde stages in Berlin, Willisau, Chicago and New York, she has played with Don Cherry, Louis Moholo, Hamid Drake, Andrew Cyrille and George Lewis, her solo performances show her as a leading pianist of European jazz. In the last years of her career, she was finally deemed worthy of playing in the temples of high culture, a late triumph.

As in his interview collections Christian Broecking is more interested in sociocultural conditions than musical investigations, often touching on issues of material survival or gender politics: Irène Schweizer had to work part-time as a secretary for a long time to make ends meet, and she came out as a lesbian at an early age.

Broecking’s biography is diligently and thoroughly researched, it is at its best when it tells anecdotes. One chapter addresses the chronic underpayment of jazz musicians, one deals with "Knitting as Provocation." Time and again, the author inserts digressions to explain a fact even more explicitly and places it in a social context. As a result of Schweizer’s consistent advocacy against apartheid (she has had very good connections to the South African expats in London) and for women's rights, she was part of the so-called Fichen scandal, in which she was surveilled by the Swiss secret service.

Nevertheless, the pianist continued to be active in the feminist and lesbian scene. She has kept on provoking and challenging, mostly in a musical way with the Feminist Improvising Group FIG, the European Women's Improvising Group EWIG, the Swiss-French-English trio Les Diaboliques and the organization of the first women’s jazz festival in Switzerland. All in all: Anyone who wants to be comprehensively informed about the life of the “grande dame“ of Swiss jazz can’t go wrong with this book.