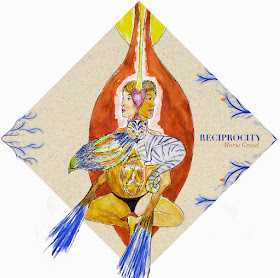 María Kim Grand and Savannah Harris and Kanoa Mendenhall: a power trio is, by necessity, more than the sum of its parts. Over the course of her first albums, Grand worked with her DiaTribe ensemble, a core rhythm section with part-time expanded lineups. For her latest album, Reciprocity, hits refresh on the lineup and delves into some brilliantly exciting new compositional strategies. If that sounds overly academic, just know this band is on fire: swinging, funky, and blazing.

“The joy of being exactly who I am,” the opening vocal statement in round, is only one half of the album’s thesis, the other is the first word of the title: “Creation.” Reciprocity continues Grand’s exploration of womanhood, focused here on motherhood and her personal experience with pregnancy. Mendenhall and Harris embrace the journey, and each player takes both a supporting and leading role. The great band leaders know music’s more than a set of charts, it’s a shared spotlight, an opportunity to lift each other up equally.

Grand’s journey through the spiritualism and physicality of womanhood and maternity is reminiscent of the polyphony of Glenn Spearman’s “Seed Sounds” from his classic Blues For Falasha, where Spearman likewise channeled parenthood, religion, and philosophy to great effect. Grand’s project is less musically hurried, with interwoven through-lines running the length of the album. The “Creation” series, for example, comprises half of Reciprocity, patiently laying out a kind of thesis statement for the trio itself. On “Creation, Ladder of Swords” and “Creation, Interlude,” Mendenhall takes the lead, making a clear case for the trio as counterbalanced unit, more than a lead-plus-rhythm section configuration. Mendenhall’s in the class of Nick Dunston and Junius Paul, the generation that grew up post Mario Pavone, Gary Peacock, and Charlie Haden, and she carries forward their tradition of melodically complex statements. Harris’s playing has the feel of Kenny Wollesen, and she is nicely highlighted on “Fundamental” parts 1 and 2. Later, on “Now, Take, Your, Day,” Harris gives the Rollins-esque melody a funk-rock jolt, pivoting to hard bop and back in lockstep with Grand and Mendenhall.

Like the piano trio, the sax trio has both a longstanding tradition and seemingly infinite evolution. Grand, Mendenhall, and Harris slide effortlessly into this continuum, calling back and looking forwards with an imaginative, inventive dynamic.