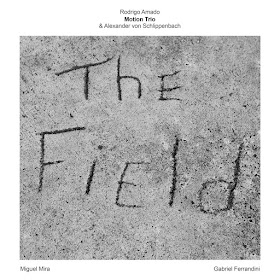 
The Field is the second excellent album that Portuguese tenor sax player and bandleader Rodrigo Amado released this year, following his quartet This is Our Language’s Let The Free Be Men (Trost, 2021). The Field offers Amado’s Motion Trio - cellist Miguel Mira and drummer Gabriel Ferrandini, collaborating with one of Amado’s greatest all-time heroes and forefather of European free-improvisation, German pianist Alexander von Schlippenbach, the leader and founder of the Globe Unity Orchestra and his legendary trio, with Sax player Evan Parker and drummer Paul Lovens. The Field was recorded at the Vilnius Jazz Festival in October 2019, and Amado, who is also a gifted photographer, contributed the cover photo.

Amado told (Free Jazz Blog’s esteemed contributor) Stuart Broomer that he formed Motion Trio in 2009 and the von Schlippenbach Trio represented for the Motion Trio a model for what it was looking for in its own music. The von Schlippenbach Trio refines for the last five decades a bold and uncompromising abstraction of the jazz tradition (and von Schlippenbach is one of the most original interpreters of Thelonious Monk songbook), contemporary and roots music (von Schlippenbach incorporates compositional ideas of Arnold Schönberg and Anton Webern into his own compositions) into a new language of its own. Add to this inclusive vision the collaborative spirit of the Motion Trio, with trombonist Jeb Bishop (Burning Live at Jazz Ao Centro, JACC, 2012, and The Flame Alphabet, Clean Feed, 2014) and trumpeter Peter Evans (The Freedom Principle and Live in Lisbon, NoBusiness, 2014), and undocumented meetings with Steve Swell, Matthew Shipp and Larry Ochs, all emphasize Motion Trio confidence in its own identity and its openness to new adventures.

The 56-minute title piece of The Field is a masterful demonstration of free improvisation by experienced and strong-minded shamans of this art, an open-minded, coherent and organic one where the outcome is greater than its parts. A transcendental listening experience that suggests optimistic thoughts about camaraderie, collective artistic and social activity and the human spirit at all. Von Schlippenbach, 81 years old at the time of the live performance, bursts with fresh and articulate ideas and knows how to engage with or inform the idiosyncratic aesthetics of the Motion Trio with wise and insightful ideas, always with remarkable precision, and how to shift the intense dynamics and add timeless depth into it. Often he acts like a magician architect that instantly lies or removes the right blocks, creating a parallel harmony or liberating chaos. He often challenges the intense commotion of Amado, Mira and Ferrandini, as a trio and as individual improvisers, sometimes surprising fragile and emotional ones and other times patient and meditative ones, including the poetic coda. Amado sounds at times more rooted in the legacy of American jazz great tenorists than in his other outfits. And, yes, there are brief fragments where von Schilppenbach draws Monki-ish cyclical lines, and immediately answered by Amado who is well-proficient with Monk history with the great tenorists. Throughout this piece, and again and again, the Motion Trio and von Schlippenbach find their own conversational and well-balanced common ground as if this was not their first-ever performance.

The Field sounds like Amado and Motion Trio found their own field of dream with von Schlippenbach, full of wonder, passion and imagination.