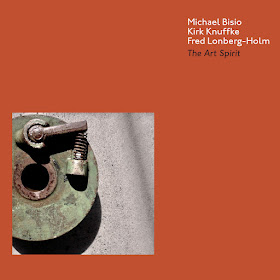 This trio’s first release, Requiem for a New York Slice (Illuso, 2019), was affective and cathartic. It was dedicated to their friend Mike Panico, co-owner and producer at Relative Pitch Records, whose sudden and tragic death prompted the trio to record the album just three days after his passing. But it turns out that Requiem wasn’t the trio’s first recording. In fact, just two weeks earlier, this bass-cornet-cello trio had completed their first recording session, now available as The Art Spirit (ESP-Disk', 2021). Knowing that this trio so quickly reassembled to record Requiem, under heart-rending circumstances, lends this ensemble a special quality.

The album The Art Spirit is inspired by Robert Henri , a turn-of-the-twentieth-century artist, teacher, and organizer against restrictive establishment forces in the art world, whose 1923 book The Art Spirit has been a guide and inspiration for artists.

I can’t resist noting that the album begins with what sounds like a solitary cicada just awakening with the dawn. (If you’ve not witnessed this, it’s fascinating.) That’s Kirk Knuffke’s brassy finesse (cornet, soprano cornet), and within seconds his sound is not only awake but airborne. Meanwhile, Michael Bisio (bass) overturns a basketful of pizzicato, tumbling all over and around the listener like bright blossoms. Fred Lonberg-Holm (cello) bows diagonal runs, scrapes, tremolos, warped dyads, and summons many distinctive sounds from his instrument, sounding not unlike a communiqué from another galaxy. He also broadcasts, oh so quietly in the background, a subtle electronic haze. With such creative gestures these three artists transmit ebullience in song that’s a delight to behold, titled “Not a Souvenir of Yesterday.” The sympathetic contrast of their sounds and styles is a big element of what is so pleasing about this ensemble's music.

Each of these artists have a multitude of notable works. Read here for more about Michael Bisio—he who has been aptly dubbed “a poet of the contrabass.” More about Kirk Knuffke’s work (which I literally cannot get enough of) can be found here. Details of the prolific works of Fred Longberg-Holm can be found here and his discography.

“r. henri” is the next song, a Bisio composition, and Knuffke leads with crystal clear notes of pure melancholy. Bass and cello soon join with arco accompaniment that aches beautifully. Lonberg-Holm offers the raw pangs of hair on metal, and Bisio bows with pathos. This tune stirs deep emotion. The latter half carries a similar mood, but slightly more kinetic, a longing for something to be born from the pain, somehow. Cello and bass duet exquisitely for much of the song, with Knuffke expressing just as much with silence as he does with sound.

“Both Keys Belong to You” is the longest track, and it sounds like it’s telling a story. Much of the first part features Bisio plucking fast and wild, with cornet and cello blending phrases, suggesting a close conversation about an impassioned topic of the listener’s conjecture. Bisio picks up his bow in the middle part, to mesmerizing effect. After Knuffke emits a somber call, bass and cello bow sirens from their strings, and the cornet pushes the sense of alarm higher. The last part of the song features some briskly burning blue fire stoked by bass and cornet. The sonic narrative told by these artists is fascinating.

Each song on The Art Spirit is richly inventive and evocative. “Things Hum” is a bluesy Bisio composition: a sly melody from the cello seems to dart in the dark alleyways of Bisio’s low register vamp, when Knuffke steps out from the shadows, the metallic rattle of his mute curling in the air like cigarette smoke. “Like Your Work As Much As” journeys from toe-tapping straight-ahead swing, through effects-laden molten lava, to a charming syncopated beat with Knuffke blowing streaming sparks through his cornet.

Even with such diverse musical invention, I found this to be a wonderfully balanced album. It certainly captures Robert Henri’s words in The Art Spirit (pg. 4), “We are not here to do what has already been done.”

I have listened to this album at least thirty times and I really can't get enough of it. Simply beautiful.

OMG what a wonderful piece of music! Wonderful review as well. I listened to the whole thing while browsing Robert Henri paintings.

Not sure I've quite made it to thirty, but I know I will. :) It's the kind of album I could spend the whole day with.