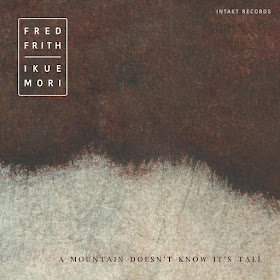 These duets were recorded in 2015 in the context of projects in Switzerland with Werner Penzel, first a score for his radio play Zen Is the Biggest Lie and then one for Zen for Nothing, his documentary film about the Antai-Ji monastery in Western Japan. On the final day of the collaboration, Penzel suggested Frith and Mori record together, thus initiating this CD, their first wholly improvised recording in forty years of collaboration. For Mori, the spirit of the music may be continuous with work on the film soundtrack: “…it was about playing with everyday noises that arise when cooking, playing ping-pong, and especially when laughing.”

The CD is as spontaneous as music might want to be. Mori plays laptop electronics while Frith plays home-made instruments and various toys and objects, restricting his electric guitar (it’s luminous on “Now Here”) to two of the 15 short tracks, which range from a minute to 5’28”. The individual pieces are evanescent delights. Mori has a genius for creating sounds that seem to be shot from nothing, take unpredictable trajectories, indicate points of light and then disappear into the firmament. Sometimes, too, she imitates airplanes and cathedral organs. That heady abstraction is here complemented by Frith’s virtuosic handling of small acoustic instruments and household objects, to the extent that their sounds can become indivisible. A piece like “Shōdōka” is so subtle that it sounds like it is inventing itself; “Hishiryō” reveals a continuous sound that moves between engine, flute and voice. Heard on headphones in a mid-summer inner-city garden, the music is porous, inclusivist, reaching out to include, accept or illuminate wind, traffic, dogs and keyboard clicks. 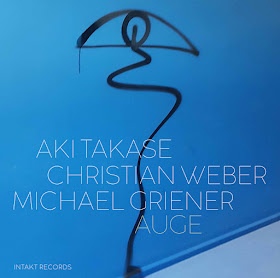 A long-time fan of Aki Takase’s work, I finally caught her live with Rudi Mahall in Berlin in 2019 and was blown away by the wild swing from piece to piece, from classical-inspired broken fugues to barroom stride to playful romps on a toy xylophone to a piano etudes accompanied by an opera singer who had concealed herself among the crowd. Takase is clearly out there, sometimes through composed and rehearsed pieces; other times through instant pro- and reactive improvisations that capture the magic of a fleeting moment. The Berlin performance was a combination of these elements. Auge, however, captures the other side: straight-up Berlin free improv.
On Auge, Takase finds herself in a classic piano trio with fellow Berliner Michael Griener on drums and Swiss workhorse Christian Weber on bass. What is especially compelling about this release is the counterveiling forces of spontaneous improvisation (none of the tracks are formal compositions) and the tendency of Takase, Weber, and Griener to fall into unison. Often, it sounds as if Takase, a reluctant leader, arrived with melodies and bare-bones structures for Griener and Weber to fill. Then, of course, the trio break off into less structured terrain, but regardless of who breaks free first, the other two follow into complementary sonic space. This is no small feat, given the stylistic leaps taken between more tempered pieces such as Last Winter and While in Rome and the jangly energy of much of the rest of the album.
Echoes of that clunky, self-consciously amelodic cacophony of early Euro improv, but Takase, Weber, and Griener always stop short of getting there, surrendering themselves to the pull of melody, the structure of classical progressions, or just the jingle-jangle lure of their clear jazz inspirations, especially on 'Calcagno' and 'And If Not Why Not'. I am less familiar with Weber and Griener, so I will not venture into how conventional or unconventional this is for them. As far as Takase, goes, however, this is another beautiful and wonderfully tortuous addition to her already impressive oeuvre. 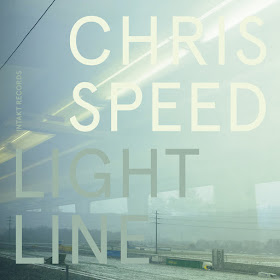 After decades of leading bands and collaborating on projects that have resulted in umpteen creative and inspiring recordings, Chris Speed has released his first solo album. Light Line (Intakt, 2021) is just him, his clarinet, and fifteen pieces that make for truly luminous listening.

Some may know him better for playing the saxophone, but he’s been recording on clarinet since at least the mid-90s with Human Feel, Tim Berne, Dave Douglas, and John Zorn. More about his work can be found on his website and his massive discography .

Last year, Chris Speed gave an interview where he talked extensively about his relationship with the clarinet, his motivation for crafting a personal sound, and his approach to playing and composition. In preparation for recording Light Line, he worked on Bach’s partitas for some aspects of technique development. But you won’t find any Bach compositions on this album—instead, Speed presents versions of John Coltrane’s “Sun Ship,” Ornette Coleman’s “Enfant,” Julius Hemphill’s “Rites,” and Eric Dolphy’s “Miss Ann,” among others. How can practicing Bach aid in performing the works of free jazz titans such as these? It's beyond simple me, but the results sound incredible.

In addition to the above, this recording features compositions from his colleagues Skúli Sverrisson, Andrew D'Angelo, as well as a handful of works written by Speed himself. More than half of the tracks are under 3 minutes, and the two longest ones don’t exceed 5 minutes. This results in melodic themes being presented in their immaculate essence, and this manner of focused expression through the unique vehicle of a solitary clarinet often reveals new facets of the song. On “Rites” for instance, Hemphill’s original from the classic album Dogon A.D. is incantatory and rapturous. On Light Line however, Speed exposes a longingness in the theme, and a sprightly curiosity in the harmonic elaboration.

Speed’s version of “Sun Ship” is also revelatory. In Coltrane’s original, the extremely short theme repeats in bursts, pushing and pushing an explosive, fiery ensemble performance. In Speed’s solo clarinet version, while his playing approaches the pace and dexterity of the original, the sonic quality conjures visions of a spirited dance within an enchanted forest.

Come to think of it, enchanting well-captures the feeling I get from listening to the luminous sound Speed evokes, and his original compositions on this album do much to deepen this experience. “Light Line” flutters and soars like a bird darting about the bright blue sky, and a mischievous melody on “Cat Heaven” charms the listener. The album concludes with an achingly beautiful rendition of the Paul Motian Trio’s “It Should've Happened a Long Time Ago.” In email correspondence, Speed expresses reverence: “One of the most important bands for my generation was the Paul Motian Trio and this is just a gorgeous composition that I’ve been listening to for 30+ years.” It’s a tender conclusion to a fascinating album, available as CD or digital download. 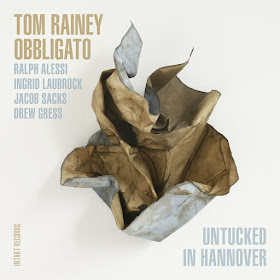 Untucked in Hannover is a live album consisting of American standards – apparently, it's the third one the band has done. To present these ancient songs in a manner that consistently surprises is no small feat. The twists and turns often render the tunes unrecognizable with impressionistic splatter; but the skeletal forms generally - and amazingly - remain intact. The music is never less than completely fascinating.

Percussionist Rainey and bassist Drew Gress typically stay within their alliance as the Rhythm Section (caps intentional) while Ingrid Laubrock's warm sax dances with Ralph Alessi's brittle and sharp trumpet over Jacob Sacks' incredibly deft balancing act of goosing the rhythm section while finding a third counterpoint for whatever web Alessi and Laubrock are weaving. In addition to this difficult job, you should know that he is replacing the magnificent Kris Davis on this particular date. And he is crushing it. (Check him out about halfway through “I Fall In Love Too Easily” for a stellar example.)

Rainey and Gress propel the band individually while anchoring them collectively – and that's what makes them such a special team. Rainey does get a solo on his own band's album (between “What's New” and “There Is No Greater Love”), but one that tastefully displays the ways in which he colors the music. No grandstanding or show-off bullshit. And the way the band pulls together to play a the standard head of “Long Ago & Far Away” is the best dessert at the end of a hearty meal I've had in quite some time. Definitely gonna check out those other two albums of standards now.