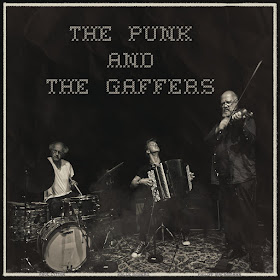 The Punk and the Gaffers is a brief 27-minute set recorded at the 2018 Blow Out Festival in Oslo, which (including this set) Paul admirably covered here . This release captures the first time these musicians played together. And it is a scorcher, albeit in an odd manner.

First, however, the instrumentation. The legendary Philipp Wachsmann plays violin; the esteemed Paul Lytton plays drums; and Kalle Moberg, among the few avant-accordionists of note today, round out the trio. Others, of course, have brought accordions into contemporary improv: Jonas Kocher in his extended style, Guy Klucevsek in his eminent stylistic bridging with Dave Douglas, Rune Larsen in his brief but potently quizzical work with Luther Thomas, Adam Matlock in his solo work and appearances with Anthony Braxton. There are surely others I am overlooking, but Moberg is rightfully among the few who merit such mention.

Now, on to the music. I am not sure whether this is exactly what I expected. I came in with few assumptions other than that this would be strange and compelling. And it is. It begins with airy clitter clatter. Some woody percussion here. A series of violin squeaks there. A range of unconventional, sometimes ear-bleeding, sometimes toyish accordion sounds all around. Wachsmann wavers between brief bouts to romantic and somber melodicism and free improv buzz saw aggression. Moberg runs the gamut of what an accordion can do playing with frenetic keyboard runs and punctuated huffs. Lytton plays in the post-Murray vein that has become the standard aim of much contemporary drumming that seems always several steps beyond anything recognizable as a steady rhythm yet manages to imply time-keeping while forcing itself to the front in this case as an equal partner with the keys and strings. What is remarkable about this trio is how percussive the entire effort sounds. I am not sure what discussions were had before this outing. If any form was discussed, however, it seems to be that the trio would play a set of simmering energy that never quite boils over, that each instrument would shine at times its own solo space, but all would be grounded in the clicks, clunks, and knock of a sputtering engine.

That said, I am confident nothing like those words were spoken, even if they discussed the set beforehand. The connection is too organic, and the responses are too immediate and subtle to be anything beyond reflex and spontaneous but flawless communication. Maybe there was no discussed form, and this this was all concocted on the stage and on the spot, of three musicians with decades and decades of separate practice but somehow of like minds on this particular day. Like any good improv, it is difficult to say. What is not, however, is that is set is curiously satisfying. It is spacious and dynamic, but plays much more with sound, its spikes, warps and textures, than silence or anything conventionally harmonious. The set is short and burns out rather abruptly at the end. Still, the set is full. True, the band could have continued. I would have loved for the album to continue. But, in its understated intensity, it seems Lytton, Wachsmann, and Moberg did what they wanted in a state of intense concentration for the time they had and stopped when they were done. There is a lot to be said for that.

The Punk and the Gaffers is available on CD and via download.