Today we continue with our tour of the world of  Sax & Percussion duos, highlighting new albums with even more than one by Sabu Toyozumi, Vasco Trilla and Mars Williams. 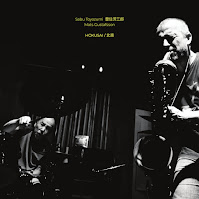 We know drummer Sabu Toyozumi from his collaborations with the likes of Wadada Leo Smith, Itaru Oku, Paul Rutherford, Kaoru Abe. On this duo album he is joined by Mats Gustafsson for a very open and adventurous album. The Swede is primarily active on his baritone saxophone, demonstrating his skills at producing deeply emotional almost human wails out of his instrument, while at the same time using it as a percussive instrument with tongue clacking and other techniques.
The album has one solo sax piece, and one drums solo. The former is built around silence, like Japanese calligraphy, using a few powerful black sonic brush strokes on a white background, the latter is a fifteen minute exploration on and of the drumkit. Both musicians come back together for another 20 minutes of improvisation. It's an interesting archival album that will appeal to fans of both artists.
The peformance was recorded live on 11th and 12th June, 2018 at Jazz Spot Candy, Chiba, Japan. 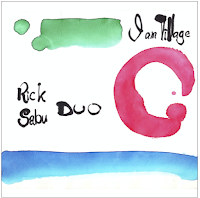 Toyozumi also released this duo album with American altoist Rick Countryman, their second after "Sol Abstraction" from 2019. Both musicians have a very intense musical collaboration, with eleven albums released in various line-ups. That they find each other easily can be heard on this album. The nature of the music is totally different than on the duo with Gustafsson: it is more fluid, with both instruments constantly pushing the sonic narrative forward, and less exploratory. 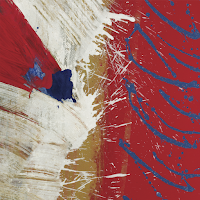 I must admit that I had never heard of Skeeter Shelton, who is a Chicagoan sax-player and son of AACM member Ajaramu, who happened to be one of Hamid Drake's teachers. Shelton has played in various ensembles, including the US Army Band, but most importantly as a member of Faruq Z. Bey's Quartet.
Drake lets Shelton take the lead, and the saxophonist plays in a true free jazz fashion, with rhythmic phrases evolving into free improvisation. He plays flute on one track. Drake gives the saxophonist full support and dynamic interaction. The performance is charming if I'm allowed to use that word, not very exploratory or unique, but also not presumptuous. It is warm, welcoming, with great melodic lines and sensitive tone. 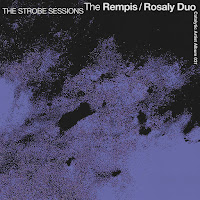 On January 30, 2009, saxophonist Dave Rempis and drummer Frank Rosaly recorded their first duo recording at Strobe recording studio, released as "Cyrillic" in the same year by 482 Music. They recorded a second session in 2012 at the same studio but the music was never released ... until now. On five intense and at times lyrical pieces, the two musicians demonstrate their art and their wonderful sense of interaction. Apart from duo recordings, both have performed extensively with other bands, including the Rempis Percussion Quartet. This album nicely fits the gap between "Cyrillic" and "Codes/Myths" that was released in 2020, although we wish the time gap had been smaller. The musical gap itself is not as great as one might expect. Their improvisations range from rhythmic jazzy moments over lyrical and even quieter moments to full power energy play, and everything in between. It is fun, it is intense, it is rich.
Fans will be happy that these tapes were unearthed and eventually released. 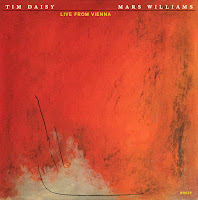 From the first notes you know this will be one dynamic, energetic, power play. There will be no space for silence, just brutal force and musical passion. The opening track is breath-taking in a very literal sense and you feel exhausted as I'm sure both musicians are after the first ten minutes. Mars Williams gets some time to breathe because Daisy introduces the second piece only with his drumkit, but it does not take long before Williams' horn joins, again invigorated, and encouraged by shouts from the drummer. The third piece, "Klangbrücke" (sound bridge), is a solo improvisation for drums, and the last piece starts with a long sax solo improvisation for about ten minutes when Daisy joins for a ten minute duet of sheer musical joy and powerful interaction, strongly encouraged by the equally enthusiastic audience, and in a kind of mirror structure, Williams now takes a step back to give Daisy the final five minutes for a solo percussion moment. The crowd is truly enthusiastic, which adds to the fun. 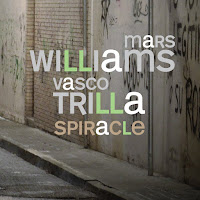 Mars Williams is in a different universe in this duo performance with Spanish percussionist Vasco Trilla. Trilla sets the tone of the first piece by creating a sonic environment orchestrated by carefully paced percussion. The saxophonist is more subdued, calmer, getting into the atmosphere that the drums created, and after the while the intensity increases and we get fireworks for a moment. "Stigma", the second piece gets a solo sax intro, again relatively intimate and lyrical, but when the drums join, both musicians play up a storm. This ever shifting perspectives, volume and tonality remains a structural fixture for the entire album.
Listen and download from Bandcamp. 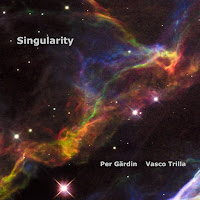 Let me first update you on your knowledge of astrophysics: A singularity is a location in spacetime where the density and gravitational field of a celestial body is predicted to become infinite, according to Wikipedia. Swedish alto and soprano saxophonist Per Gärdin and percussionist Vasco Trilla invite us into their outer space sonic world. Gärdin welcomes us with sparse high-pitched tones, hovering above the even sparser percussive effects that Trilla generates. He uses timpani, gongs, clock chimes, metronomes and his usual drum set throughout the album.
Most tracks are relatively gentle, but others, such as the third one become more dynamic, and even unexpectedly noisy. The great thing about the improvisations is that even if the overall tone is relatively accessible, the music itself is very exploratory, guiding us through unknown territory as on a long and mysterious space journey. Both artists perform with the same vision of how the music should sound, and they stick to it throughout. A nice achievement. 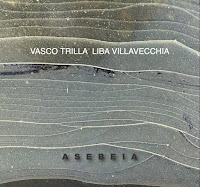 Well ... here is Vasco Trilla again. He is not only very productive with his own projects, but also apparently very much in demand by other bands. This is his 39th album in less than two years. He is in the company of altoist Liba Villavecchia, also from Barcelona. He is a music teacher at the Escuela superior de Musica de Catalunya, with a degree from the New England Conservatory.
The music is freely improvised, nervous and agitated on the first two tracks, Koinos (what is shared) and Eudaimonia (happiness). The music becomes more solemn with "Pistis" (creed or faith), a slow ethereal piece organised on a tight tonal center. Each Greek word gives an explanation or served as inspiration for the improvisations. On "Akolasia" (excess) all hell breaks loose, while "Ataraxia" (freedom for perturbation, complete absence of desire or fears) brings us back to solemn and spiritual territory with sparse sound resonating in empty space.
The duo go even a step further on "Eidola" (images of the senses, sketches sent from objects to the senses), creating a wonderful soundscape of colliding and harmonising sonic inventions. "Sophrosyne" (spiritual healing) is equally strange and emotionally compelling, with both instruments conjuring up feelings of pain and human suffering. The album ends with "Theion" (the divine, that which transcends man), as you can expect even a step further, creating monotone sax sounds against a slowly changing resonating bass tone, possibly the result of bowed percussion. It is eery and strange.
The album's title, Asebia, means "a criminal charge for desecration and disrespecting of divine objects". I do not think they will be charged for their album, quite to the contrary. The entire project is a carefully progressing suite of human and spiritual emotions and states, evolving from the profane to the sacred.
One more example that less can be more, or that you can create a universe of sound with nothing more than a sax and percussion (although I risk to be criminally charged for this reductive description). 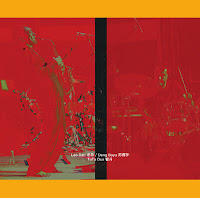 For those who love vinyl albums, I recommend you to be fast to get your copy of this one, as only 300 copies exist. It brings a great duo recording full of suprises by Lao Dan on alto and Chinese flute and Deng Boyu on drums and percussion. I can only congratulate the NoBusiness label to make this performance - recorded on October 2019 in Guangzhou, China - accessible to all of us.
The first side consists of three very energetic tracks, bringing us free jazz in the best of traditions. The sax howls, and almost constant overblowing in the fiercest parts, with the drum kit hit hard on all its components together. The second side is a three-piece suite (no pun intended), inspired by nature: "The Wordless Ocean", "The Grass Against The Wind" and "Cloud Above My Head, Will You Float On To Chicago", and both musicians now fully integrate Chinese elements in their music: the flute to start with, the dramatic and suprising narrative elements of heavy percussion and shouts, is then transformed in high-pitched alto moving back to full free jazz mode, to merge both styles in the last track, which combines Eastern and Western elements, including another unspecified Chinese wind instrument (I assume a suona), ending this great album with a nice level of ethereal and light effects.
Despite the relative short length of an LP, the duo manage to give listeners a wide and broad musical journey, through styles and continents and time zones, but all brought with a single vision.
Luckily for fans, the music is also available digitally.
Listen and download from Bandcamp. Lithuania saxophonist - here on contrabass and prepared clarinet, tenor and soprano saxophones - is a musician with many faces, ranging from the powerful free jazz of "Kablys" over the melodic and sensitive excursion with pianist Petras Geniusas, to the angular free improv with Barry Guy on "Lava". On "Pacemaker" he demonstrates yet another side of his art, now in the company of Christian Windfeld on prepared drum kit, drums, drums and cymbals. Windfeld is a Danish musician whose minimalst art tries to explores the full possibilities of one single instrument.
Each side of the vinyl album presents one long improvisation, the first a quietly and slowly developing atmospheric piece in which both instruments play around and explore stretched notes and subtle variations on silence. Windfeld takes the lead by setting the tone of the piece, with Mockūnas cleverly exploring the percussive possibilities of his wind instruments, by having repeated staccato blows or in contrast lengthening his voiceless release to harmonise with the bowed cymbals or rubbed skins. Only occasionaly does his sax get its full voice and the effect is stunning against the minimalist backdrop. The second piece is introduced by Mockūnas with a melodic soprano solo that gradually invites the percussion in, and once on board, the tempo and the intensity increase for a short welcoming embrace, only to return to a more minimalist soundscape built around silence, after which the baton is handed back to Windfeld for a percussion outro, giving the piece a mirror effect.
The LP comes in a limited and numbered edition, but is also available digitally.