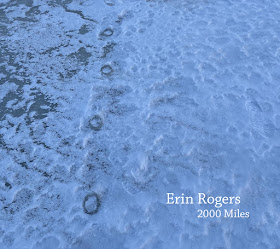 This is Rogers’ second solo after Dawntreader from 2019, also on Relative Pitch. In 2021 so far, she also appears on the Wild Up ensemble’s Julius Eastman Vol. 1: Femenine .

2000 Miles presents like a debut exhibition. The snaking lines, overtones, and breath of Dawntreader are here too but significantly expanded upon and joined by key clicks and vocal multiphonics as substantial musical material. While these approaches appear throughout 2000 Miles as assimilated components of a cohesive language, each track seems to systematically showcase one approach, culminating in the sidelong compendium of “New Moon.” The cascading key clicks of “Waxing (Home I)” coax many colors not just from their varied areas but from their materials, alternately metallic, padded, and something like bamboo, and while some sound without wind, empowered as their own percussive musical material, others appear to act independently of the behavior from the bell at the same moment those keys more clearly responsible for blown notes can be heard. Much of “North Star” foregrounds a vocal multiphonic alongside shrill squeals and wails, haunting, howling, bellowing, like the wind in storms from old films. “Angelface” illuminates the broad palette of breath in its air notes, raspberries, cavitational streams, circular sniffing, exaggerated inhalation and exhalation and opening and closing embouchure, sighs, airy scatting, gasps, and the hiss and spit and suck of the prelude to hocking loogies and all these lungs hymns consequent effects on the sound of the saxophone. The ear is drawn to overtones in “Township Road 494,” their fragile, singing harmonics intermittently manifesting from barely-there soundings like sashes of light between branches of a shade tree in the breeze or through a glass chandelier twisting in the unperceived entropy of a room; something memorable and something missed from Dawntreader is the interaction with a resonant cymbal, but I suspect that the environmental interplay that seemed so vital there persists in these perhaps space-dependent harmonics. While key clicks permeate “Home II” as they did “Waxing (Home I),” more than any other previous track “Home II” features tonal acrobatics and glimpses of triadic spirals with a speed at or just below the threshold for multiphonics or the illusion of them. And “New Moon” synthesizes everything to that point, ending with Rogers catching her breath.

It is as if the action is shared, because beyond the breadth of technique and hour duration, structures are tightly collaged, flitting from passage to passage, pacing is typically fast, and dynamics are generally loud - so much so that silences lasting only a couple seconds in “Home II” convey their gravity through stark contrast.

Not just some voluble catalog of technique, 2000 Miles feels more like developing a methodology around multiphonics through a variety of means in real-time and cultivating the rhythmic character of saxophone in the discrete kit of key clicks and punctuative breath, each of which indicates an intimacy in the sound by underscoring the mechanism and the performer, both of which can be too often obscured by the notes. A singular voice.