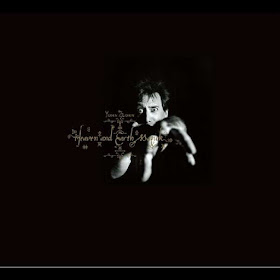 When I listen to music that includes both composition and improvisation, I enjoy trying to identify which is which. It’s like a creative puzzle that I never know if I actually solve. In this album from composer-colossus John Zorn, the listener is given the seemingly straightforward solution to this puzzle, which actually ends up inviting a different set of opportunities for deep engagement with the music.

On Heaven and Earth Magick (Tzadik, 2021), the music we hear is half-composed and half-improvised—but instead of each member of the performing quartet alternating between notation and improvisation, each musician is committed to just one. Sae Hashimoto plays vibraphone and Stephen Gosling plays piano—and their performances are completely notated. Ches Smith plays drums and Jorge Roeder plays bass—and their performances are completely improvised. As I immerse in the music with this knowledge that two players each are assigned one or the other approach, it’s striking how the improvised parts can sound composed, and the notated parts can sound improvised. The piano and vibes often display dazzling speed and intricate precision, while alighting upon a beguiling lyricism in other sections. And though the bass and drums play extemporaneously, they equally offer a performance replete with complexity, delicacy, and unfettered craft.

All six pieces on this album are composed, arranged, and conducted by Zorn, and each dazzle with a wide range of musical moods and tempos that can suddenly burst forth and then vanish in exciting and mysterious ways. “Acéphale” demonstrates this compellingly. At about ten-and-a-half minutes, it’s the longest piece on the album, beginning with an explosive two-second whole-band frenzy. But when everyone abruptly stops, a dissonant clamor is left to reverberate in stillness...until each instrument quietly begins rustling again. About a minute in, another eruption from the piano sends the bass not walking but sprinting. While much of piece has each artist trading in spare, abstract phrasing, there are sections that feature some lovely Zornian romanticism, as well as a pizzicato bass solo that is positively uplifting.

The second longest piece at just over ten minutes, “Konx Om Pax” starts gently, each instrument taking turns trading brief statement that are slow and beautifully melodic. Soon, a charming syncopation emerges with Smith playing Latin rhythms, then disintegrating again into playful abstraction. The latter third of the piece surges with raucous, thrilling crescendos and thunderous drums solos. This pattern of stylistic alternation is cyclic, and it exemplifies a thematic approach in evidence throughout the album—the restless shifting among moods, tempos, timbres. The listener can never settle, she’s always adjusting to the most recent change and grappling with the juxtaposition of contrasts. It makes for a demanding adventure that excites and fascinates.

In a feature from Rolling Stone last year, Zorn describes seeing Cecil Taylor perform in the early 70s. At that time, Zorn had been immersed in the works of composers such as Anton Webern “where every note had to have meaning...had to have a reason for being.” For Zorn, seeing Cecil Taylor perform was “a cathartic experience,” and he says, “I spent the rest of my life—I'm still doing it—blending these two worlds of intensity and catharsis with very considered and well-thought-out formal plans.” To my ears, this “blending of two worlds” is precisely the stuff of this album (indeed, it is with many of his works). Zorn has spoken of the phenomenon of “magic” when explaining some of the less effable aspects of creating music, and this album—Heaven and Earth Magick—duly casts that spell on this listener. I hope the reader will hear for herself.

This album is available on CD through Tzadik . A live performance of the album can be heard here with the same ensemble except Tyshawn Sorey substituting on drums.