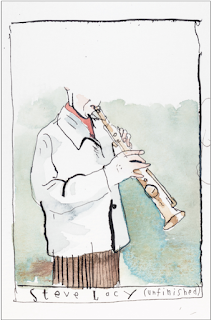 You can order directly from the publishing company.
A must-have for all fans of modern music.

This is not the first book written about Steve Lacy.  Jason Weiss published "Steve Lacy: Conversations" in 2006, a collection of 34 articles and texts written about Lacy during his life.
Stef on Monday, October 04, 2021
Share