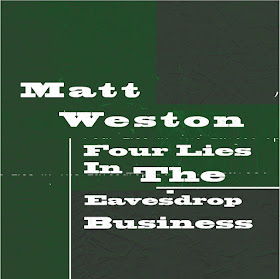 Even though every one of percussionist Matt Weston’s solo works is a deeply personal affair (performed, produced and arranged mainly by him), the main difference of Four Lies In the Eavesdrop Business from these previous ventures, like his last solo Tell Us About Your Stupor or his split album with Ted Byrne reviewed here, is that it is mastered by Jason Lescalleet.

As Lescalleet is a master of creating DIY atmospherics and an almost ambient sentiment, I get the feeling that his contribution has made Four Lies In… (which comes out as a double vinyl plus digital album) a totally different affair compared to Weston’s latest discography. We can say that a lot of the good percussionists right now expand the horizon of their work by adding elements who are not, so to say, so percussive. I believe Weston belongs to this category.

In those seven new songs that comprise the bulk of this double vinyl, Weston proves himself as a capable sonic producer, one that does not concentrate in the percussive elements of his art but goes out to find what there exists in areas like timbre, atmosphere, adding depth (plus a good production as well, I might comment) and even a strong cinematic feel.

Most of the songs last over than ten minutes, seemingly being sonic explorations or, as I would like to call them, small independent stories. I’m not sure if the electronic feel (unlike what we usually call electro-acoustic) of the songs, like in the small tale of 'You Tried To Fix The Paranoia,' shows how all of them were created before Lescalleet messed with them… In any case you will find yourself attached to its sounds and absolutely surprised by the sonic environments of all seven tracks.

This ambient feeling I mentioned earlier, makes Four Lies In…a sonic journey not just through any kind of percussion instrument, but by sculpting any kind of sound capable to tell –mostly as a linear narrative- a sonic story.

You can find this double album here https://mattweston.bandcamp.com/album/four-lies-in-the-eavesdrop-business