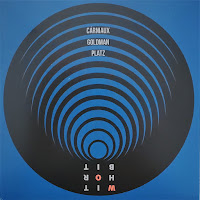 In the early and mid 90s, some twenty years ago, I was a big fan of Seatlle-based band Babkas, a trio with Brad Shepik on guitar, Briggan Kraus on sax and Aaron Alexander on drums. The sound was raw, adventurous despite the obvious composed part of it, and open to musical ideas from outside jazz. The absence of a bass made the sound just a touch harder.

I have the same feeling and appreciation of this trio with Jeff Platz on guitar, Brendan Carniaux on sax and clarinet and Max Goldman on drums. The music is direct, nervous, energetic and combines raw tones with moments of lyricism. It's not really violent, aggressive or fast, just raw and fresh, stripped of all outward sophistication and finesse, yet driven by some brutal sense of authenticity and honesty. And strangely enough also friendly, close and intimate.

Platz is in my opinion a guitarist and musician who deserves wider attention, as he is both technically strong and has interesting musical ideas. He does not make his guitar sound like anybody else, and limiting his pedals to accentuate or emphasise tone rather than to distort them, resulting in a jazzy sound with a sometimes brutal grunge approach. Interested readers should check out his two solo albums of last year, one more gentle ("Yo Como Solo") and one more harsh and experimental ("Unknown Year"). Over the years Platz has performed with musicians such as Daniel Carter, Stephen Haynes and Jan Klare.

Drummer Max Goldman is less known, and to our readers possibly as the drummer of the Danny Fox Trio. Brendan Carniaux is even lesser known, at least to me, and he also deserves wider attention. His approach to the sax fits perfectly with the intense and raw musical vision of the trio. The three musicians met as the result of the Covid pandemic.

I think the resulting album is excellent: it is at the same time a musical statement, as well as great fun to listen to.