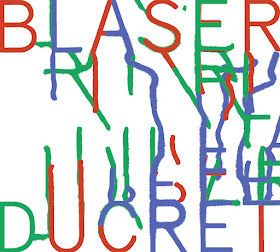 Swiss trombonist Samuel Blaser and French guitarist Marc Ducret are close musical allies. In the last decade, they collaborated in the Samuel Blaser Quartet, in Marc Ducret Trio + 3 (Métatonal, Ayler, 2015) And Lady M project ((Illusions)m 2019) and in a trio with Danish drummer Peter Brunn. They have established immediate intimacy between the cerebral, inquisitive and often melodic approach of Blaser and the intuitive, often atonal and edgy one of the self-taught Ducret. Voyageurs is the second album of this duo, following Audio Rebel that was released by Blaser and documented their live performance at the Audio Rebel club in Rio de Janeiro in September 2013. Voyageurs was recorded in a studio in Loguivy-Plougras in France in March 2109.

The immediate impression from Voyageurs, as well as of the previous Audio Rebel, is the organic fluidity of the interplay of Blaser and Ducret. These experienced free improvisers are fully aware of all the nuances of the sonic spectrum of each other’s and are focused on finding distinct and adventurous ways to intertwine their sonic realms. After more than a decade of close and longstanding collaborations, they still seek risks and know how to maneuver all the coming pitfalls. Sometimes, as the director of Jazzdor director Philippe Ochem writes in his liner notes, “the continuum resumes its course, the dialogue keeps moving on, and we are captivated by the two artists singing together”.

And, indeed, Voyageurs can be experienced as an intimate and calm conversation between friends. Blaser and Ducret share spontaneous stories, surprising secrets and eccentric anecdotes, singing songs and dancing with each other. But most of the time they simply enjoy the free spirit of this meeting while keeping its give-and-take flow and its highly vivid and playful atmosphere. Often, the electric guitar of Ducret sounds like an extension of the trombone of Blaser, and vice versa, and in impressive unison and telepathic understanding. Ducret still acts as an audio rebel and sometimes colors these conversations with intense, distorted sounds (Des états lumineux”) or navigates the dynamics into abstract, unchartered and thorny territories (“The Next Morning”, “Dans une certaine mesure” and “Across the Mountain Forest”), always trusting the close support of Blaser in these dramatic journeys. The lyrical “Morse” and “La vie sans toi” reflect best the most emotional aspects of this strong friendship. Eventually, Voyageurs tells about a musical and personal friendship, that becomes more profound over the years.