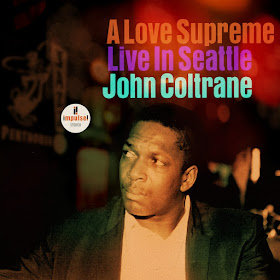 John Coltrane’s A Love Supreme belongs to that kind of transcendental music in which one is convinced that there must be a divine power. The suite-like composition proves that man is capable of creating cultural values of such incomparable sublimity that it can comfort us - at least for a few moments - over the fact that we hurl hate speech at each other on social networks or that we cannot get a grip on social injustice. Coltrane himself said that with this music he was looking for contact with forces that are at home beyond our planet. A Love Supreme is virtually an act of musical dislimitation. Even better than on the studio album you can hear this on A Love Supreme: Live in Seattle.

This recording was made on October 2nd, 1965, and was recorded during his week-long engagement at the Penthouse Club in Seattle. On that evening in the fall of 1965, however, the saxophonist opened up his composition in new directions that are only hinted at on the studio album. Live, one hears Coltrane move further away from the moorings of modern jazz, you can witness a musical catharsis.

On the studio album, Coltrane shows how the relatively simple basic material of a few notes generates an almost infinite range of variations. The basic idea is a text recited “wordlessly“, so to speak, on the saxophone - a thanksgiving to the Almighty God, a Love Supreme. Each note of the four-note hookline stands for one syllable, which through its constant repetition develops an effect from meditation techniques, releasing the spiritual power of the sound body. What John Coltrane and his quartet display in the 33 minutes of the suite is pure rapture, a moment of transcendental ecstasy; the music radiates a deep, devoted earnestness, a palpably concentrated enthusiasm reminiscent of church services. There are good reasons that A Love Supreme is considered, along with Miles Davis’s Kind of Blue, among the two recordings most often mentioned when discussing the most important jazz albums of all time. A Love Supreme has touched people emotionally like perhaps no other recording, which is why it seems strange that Coltrane so rarely played this music live.

In July 1965 Coltrane and his quartet recorded the only widely known performance of A Love Supreme to date at the Festival Jazz d’Antibes, the recording of that gig was included in a deluxe CD reissue of the album in 2002. In October 1965 in Seattle, Coltrane had expanded his classic quartet with Pharoah Sanders (tenor saxophone), Carlos Ward (alto saxophone) and second bassist Donald Rafael Garrett. A lot had happened since the studio recording of A Love Supreme the year before. Back in June, he had recorded Ascension with a tentet, a radical collective improvisation. At that time, the USA were shaken by riots, which were also reflected in Coltrane’s music (Coltrane had already recorded "Alabama" in 1963, another piece with political content). Therefore, in September ’65, during a two-week gig in San Francisco, he included the above-mentioned three musicians, who were rather located in free jazz. This lineup (plus Joe Brazil on flute) had also recorded the musically more radical Om the day before the Love-Supreme-recording here, which explains the musical direction of this performance.

In the October 2nd performance, the improvised opening bass duet - after a one-minute quartet introduction - already shows a looser band conception before the famous hook begins to unfold from the four notes in constantly changing keys and the rhythm section eventually circles this texture. It’s not until the fifth minute that Coltrane re-enters, just to dive into his sheets of sound over sheer endless cadences, just like he does on Om. The fanfare and the half-step lift on the theme may not be emphasized enough for fans of the original, but Coltrane extracts an enormous range of emotional depth from his instrument that more than makes up for this supposed deficit. Finally, he declines the basic motif through all twelve keys, which had already been hinted at earlier in the introduction by the basses. The spectacular thing about this recording, however, is that the septet repeatedly pushes the composition to its limits with freely improvised passages. Sanders and Ward counter Coltrane’s elegiac lines with their barrage attacks, which wrings completely new facets from the composition. Carlos Ward, for example, approaches the improvisation on “Resolution“ in a comprehensibly free way, he even quotes Trane here and there just to find an interessing way of interpreting the source material. What is more, this also inspires Tyner, Garrison and Jones to crazy rhythmic flights of fancy, which can be heard especially in “Pt. 3 - Pursuance“. In general, there is a much stronger focus on percussive elements here, Elvin Jones’s drum solo “Interlude 2“ is an incredibly intense example. Coltrane and Sanders are also listed as percussionists in the liner notes, the rattles, cowbells and the balafon refer already here to Sanders’s Tauhid album from 1967.

A Love Supreme: Live in Seattle is certainly a must for fans, for Coltraneologists anyway. But not only for them. If you want to know how Coltrane went from the spiritual depth of A Love Supreme to the musical wildfires of Meditations and Expression, this album is your missing link.