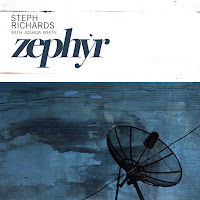 By Stef Gijssels
It is such a pleasure to hear how some musicians take their sound a step further with each album, taking risks and shifting perspectives. This is clearly the case with Canadian trumpeter - and Professor at the University of California San Diego - Steph Richards. What doesn't change, is her approach to select one single topic of inspiration for her albums. If "Fullmoon" was inspired by night landscapes, "Take The Neon Lights" by poetry, "Supersense" by the scents that surround us. "Zephyr" is inspired by her 6 months pregnancy at the time of recording in 2019. Her daughter Anza was born on November 2019. It is an intimate, delicate and at the same time exploratory album that tries to express "the idea of breathing one breath for two bodies, moving through the world with two distinct pulses happening at the same time".
Her musical partner on the album is Joshua White on piano, prepared piano and percussion. We problably know him best from his collaborations with Mark Dresser. White's understanding of where Richards wants to go with her music and sound is exceptional, including his skill at moving forward with the same level of abstraction of her music and the sensitivity of the moment.

The album is structured in three suites, with the themes of "Sacred Sea" (five treacks), "Sequoia" (3 tracks) and "Northern Lights" (4 tracks).

On "Sacred Sea", Richards plays her trumpet in water throughout, even if this is not so immediately obvious to the listener, except in the last part of the suite. She's been doing this since 2008 - and she's not the only trumpeter of course who does this (Rob Mazurek also for instance) -, refining her technique over the years. In 2011 she created the WaterCOLOR project, "a multi-media performance installation featuring musicians submerged in shallow pools of water performing multi-movement experimental works centered upon the unpredictable properties of water".

For Richards this now gets new meaning, considering the idea "that her in utero child was, in a sense, breathing underwater" (which we hope it did not).

The mood of the relatively short pieces vary a lot. "Amphitrite" is eery and short, "Nixie" wild and wayward, "Sequoia" is dynamic and intense, "Sacred Sea" is solemn and sensitive, "Heyyookkee" is playful and upbeat, "Aurora IV" is vibrant and jubilant. Within this variation Richards explores an incredible variety of timbral inventions on her horn, from whispers to spectacular clear tones, with everything in between, including gliding microtones (as a result of submerging the bell into the water I assume).

The album is short, clocking around 38 minutes, but having listened to it a few dozen times now, there is a wonderful sense of completion. What else could she have added to this? The overall concept, tone and musical vision of each piece seem to have been clear to both musicians and perfected in their minds, before the music was actually performed.

There is a sense of "finished perfection" with the underlying thought ... how else could this sound? Or put differently, there is no other way this feeling or that feeling could be expressed. It is musical poetry, concise, fluent, precise, smartly organised for esthetic value and emotional power. This power is nothing forceful, or loud, but rather the power of precision, of necessity, of inevitability. Despite the obvious improvised aspect of the music, the pieces sound complete, sophisticated and refined. And despite the variation of the album, it is balanced in structure and coherent as a whole.

Despite the timbral innovations and the abstract levels of the compositions, the music is open and welcoming. The interaction between both musicians is stellar.

Richards suprised us with all her albums so far. It is really a treat that she keeps pushing the boundaries of her art, demonstrating incredible skills on her horn that are equalled by her creativity and sense of perfection.