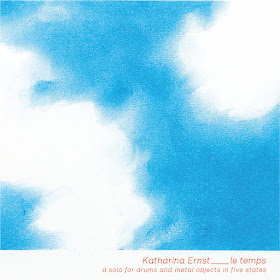 To provide a small sampling of Ernst’s work so far, she performs as ALSO with guitarist Martin Siewart (who has technical credits here), which has released Live at Wirr and Live at Celovec , and she has recorded another powerful polyrhythmic solo statement for percussion and electronics in EXTRAMETRIC .

There is a beguiling sense of simplicity in the complexity of le temps. In the scale of its orchestra - containing at least samulnori, clubs, bicycle bells, and bathtub plugs - that could be confused for just the kit. In the breadth of technique, in opening, closing, rubbing, and other gestures that confront the ear with a blown snare but could otherwise pass as traditional play. In the seemingly singular focus on one aspect of the kit in each vignette, the metal of rims and cymbals in “ouverture,” the skin in “vague,” the shaking in “flux,” so on. But almost every strike illuminates its coordinates in relation to the whole, a talking tom conveying not just the triangulation between strike, mute, and rim but the collateral jangle of snare and resonant vibrations of cymbals and the decaying reverberation of the room too. In doing so, soundings emphasize the radial nature of their waves, a sequence of contextual markers in decreasing amplitudes from the source. Next strikes appear to fall on lesser amplitudes of those previous, and their convergence produces new peaks that the beat appears to follow. Whether in the slowed cicadas, scissor sounds, sand of shaker and snare, and jam jar top in infinite twist of “vague,” in the clanging distorted cymbal washes of “ouverture,” or in the whole-kit, multi-limbed groove of “début,” what results is a shifting polyrhythm. Marches morph to stumbling arrhythmias change to something baffling but propulsive. The dimensionality of sounds lends a heightened awareness of their time, but the ensuing expansion and contraction of meter challenges the constancy of that substance.