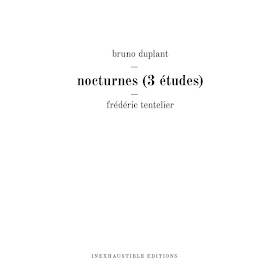 This has been a review that took a lot of time in the making. Not because of the size of it, but because it really puzzled me and I encountered many obstacles in understanding the music. I truly believe that the listener must also work hard in order to digest and understand what goes on in a musician’s/composer’s mind. Many times the different interpretations are the ones that give certain value to musical works. But let’s start from the beginning a bit.

I’ve been a fan of Bruno Duplant’s work in the field of free improvisation. As a matter of fact some of his most original music from the late 00’s and early 10’s have been documented and reviewed on this site. I followed his slow transition from his earlier improvised works to scored music closer, or in a more descriptive manner, to traditional or classical European style. During this trajectory, Duplant never left improvisation entirely out of the big picture of his music. I believe that being a multi-instrumentalist allows him more info on how to evaluate the music.

The Fender Rhodes carries some recent jazz burden on its history. I’d comment that it’s a rather bold and risky move to incorporate this instrument on the three etudes that constitute the bulk of the CD. Nocturnes is realized by Frédéric Tentelier whose work in sound installations and theater performances has given him, I believe, the experience to act more as a performer and less as a musician. Any audio documentation has, by definition, the disadvantage that we can only listen and not watch or be close to the performer.

Tentelier has managed to present the three etudes in a way that it is as theatrical as it can be –considering the medium of the CD. He allows silence to take over sometimes; his touch on the keyboard distinguishes and highlights parts of the score. There’s a field recording quality on all three etudes (that last almost an hour) that certainly transport the listener out of the confined space that he or she is using to enjoy this CD.

The music is slow moving, esoteric and, at some points gave me the feeling of willing to de-compose what’s there from the original work in order to let the performer free to improvise and put his signature on the score. This mentality of open-minded experimentation borders with free improvisation and gives me, the listener, the feeling of an egalitarian project in progress between the composer and the performer.

You can buy the cd here: https://inexhaustibleeditions.bandcamp.com/album/nocturnes-3-tudes