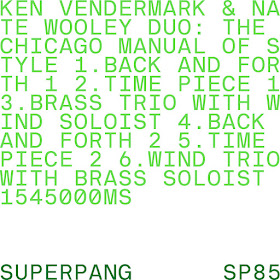 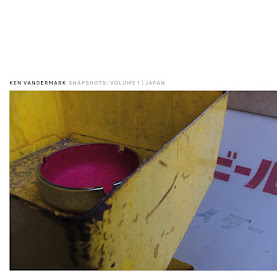 Were it your ambition to catalog all the sounds that a saxophone is capable of producing, you might need nothing more than these two recordings. I warn you, though, you are going to have to invent a brand-new vocabulary with about twenty-seven thousand words. Best to start with some solid experience, say twenty years naming new ice cream varieties and pharmaceutical products. Then get creative.

Vandermark’s Snapshots Vol. 1 includes six minutes of solo saxophone, released on two sides of a seven-inch vinyl disk and digitally. Side A seemed to me the most adventurous, as I listen to a moment ago. The only sound I’ve name so far is martini glass on keyboard causing computer to studder loudly and percussively, alpha 14. That will leave room for lots of variations in this sound. If you like this kind of music, and I do, you must have developed an ear for the vocabulary of texture. What Vandermark does better than anyone in the business is use the horn as a percussion instrument. By this he divides the music into accessible segments and each segment presents a distinct set of variable textures. “In 20th-century music, a dot placed above or below a note indicates that it should be played staccato, and a wedge is used for the more emphatic staccatissimo.” I got that from Wikipedia. They’re going to need a barrel of dots and wedges for this one.

The second side is a little more romantic in the first part, while the second goes full Hymenoptera. Look it up. When it’s not buzzing angrily, it is snorting out short but vigorous bursts of steam. Just what I needed for this Saturday afternoon.

Ken Vandermark is a Swiss army knife of a jazzman. Not only is a virtuoso on the tenor sax and the clarinet, bass clarinet, and baritone saxophone; he is also a master poet when it comes to naming albums. Airports for Light (not of light but for light), Burn the Incline, Beat Reader (I recommend William S. Burroughs), these Vandermark 5 projects come to my mind as I sit on my deck. Turkey vultures are appearing against a well-lit cotton sky.

The Chicago Manual of Style, a title familiar to anyone who has ever submitted a manuscript for review, is a flawless manuscript. It is not easy reading at first, until you realize how the dialogue works. In Time Piece 1, around 3:39, both horns are sputtering fast when Vandermark goes into a series of sharp reports while Wooley begins a haunting wail. That exquisitely spooky sound will remind you of Albert Ayler’s Ghosts.

Brass trio with wind soloist lays down a wobbling machine tone that softens into a more emotionally stable fuzz, one horn sings in, and we get light, brief, knocks from the other. This seems to me to be the heart of the recording. A soft, high cry punctuated by breathy taps. We get a persistent science fiction buzz, a fully charged sonar display, that is romantically evocative at the same time.

'Back and Forth 2' has more of a morning traffic mood, though I am not sure whether it is Chicago or Machiavelli’s Florence. The sound fields lay on one another like colored scarves.

'Time Piece 2' had me thinking of a stopwatch as the enthusiastic chortling on the left earbud traded information with the pensive, deep-dish horn on the right (when the latter isn’t squeaking). Toward the end of the piece, Wooley fades back into a more ghostly tone.

This is marvelous. From the hollow plunk to the breathy series of taps, I don’t believe I can think of anyone who uses horns as percussive instruments better than Vandermark. I am not sure anyone knows what is inside a trumpet better than Wooley. I say, check it out.

Ps. If you want to see them work this magic, check out this clip: