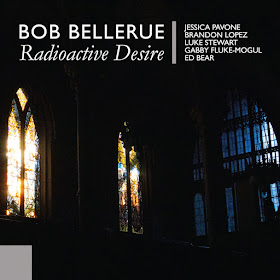 Bellerue, who here contributes feedback, electronics, suling gambuh, howling, metal, and piano, has done some engineering work for Lopez and Pavone but has not previously played with these musicians on a recording. Indeed, while Lopez and Stewart appear together separately on NYC LIMINAL SERIES, vol. 1 , I don’t think any of these musicians have played together on a recording. Which is somewhat surprising, given that each of these musicians perhaps has a reputation of reveling in the noisier aspects of their instruments. And what’s immediately striking is the composition of the string quartet, rebalanced towards the low end with two basses instead of two violins and also balanced in having two - fluke-mogul and Lopez - known for their visceral acoustic shredding and two - Pavone and Stewart - known for their explorations in amplification, a kind of composition that reveals something about the music.

Because though these pieces swim in feedback and radiate electric, the possible harshness of these environments is always tempered towards emotive movement, rarely running wild and instead underscoring the fragility of what is often perceived as power in sound, a smart balance. There are exceptions, like in the bite of saxophone and violin’s twin snakes on the title track or Bellerue’s crashing Salmoneus in the beginning of “Metal Gambuh,” but I think the group more often subverts expectations of abrasion. Bellerue’s amplified gambuh a plaintive song and his howl more mournful coyote call than heavy metal growl, swaths of sound playing on some arcane catharsis similar to whale song, or the warmth of the organ shining more brightly than its distortions on “Organ Feedback.” I also found what I did not expect elsewhere, “Bass Feedback” accentuating the treble of the group or “Empty Feedback” illuminating the orchestra of its vessels rather than some singular sine sound. There are frenzies, sometimes a shearing squall of strings or the motor chug of bass with the tea kettle whistles of violin and viola and electric dinosaur roars, but I think more often the group plays in pulse, dynamic domes’ troughs and peaks intersecting among fishtailing feedback transitions and beating patterns, all accentuated by cathedral reverb, forming a polyrhythm of waves. Between denser soundings a kind of electric tanpura simmers, inviting the ear to parse the layers of its sonic mille feuille. It stands at a crossroads, of acoustic and electric, power and fragility, harshness and warmth, drone and frenzied movement, and sounds like some ovidian renewal through violence for it.