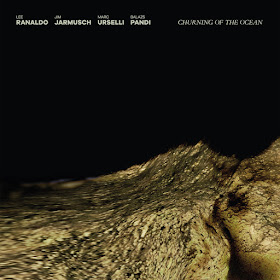 With the exception of Marc Urselli, who I admittedly was unfamiliar with before this quartet, names like Lee Ranaldo, Jim Jarmusch and Blász Pándi should definitely ring a bell to any experimental music lover.

The temptation of describing this latest offering from the quartet as cinematic is a trap I was about to fall into, especially considering Jarmusch's dayjob as one of the most important directors since the 80s, but it's a word I find overused for certain kinds of music and pretty undescriptive in general. If cinematic is off the table, the word that comes to mind the strongest when I think about this release is conscious. Everything from the album and track titles to the artwork strongly suggests to me that what was on the quartet's mind the most in the making this album was the environment, and knowing what we know about the future of our planet the reason for the underlying dread behind each of these compositions becomes apparent.

The opener "Infinite Rain" starts with Ranaldo's signature chime-like guitar and Jarmusch, Urselli and Pándi providing a perfect backdrop for the guitarist's somewhat peaceful yet suspenseful lines. For a track called infinite rain the atmosphere is ironically desolate and desert-like. The piece eventually develops into a 60s inspired psychedelic jam, with Pándi playing a straight rock beat to Jarmusch and Ranaldo's explorations. Urselli's fuzzed-out bass bursts in at some point, almost as to signal the end of the jam which then melts away to end how it began.

This first piece serves as a template for the rest of the release: the album's centerpiece "Quivering Air" builds in a very similar way, with an extended timid intro of prepared and effects-drowned guitars that maintain a suspenseful atmosphere until Pándi's thunderous drums come in to start another 60s inspired psychedelic jam.

The shorter tracks function as breathers between the longer pieces. "Tectonic Mantle" lives up to its name with Pándi's earth shaking toms complementing the dark and heavy drone created by the others and "Night of Webs" introduces some new sounds resulting in something I could only describe as Cabaret Voltaire meets John Carpenter, a direction I wish they would have explored more on this album.

The closer "Threshing Fields" breaks from the formula of the two previous long tracks. Jarmusch's reverb and delay-heavy guitar is front and center, with Ranaldo's guitar and Urselli's bass joining it in the creation of a sad yet blissful drone perpetually on the verge of devolving into an explosion of feedback and noise. Pándi's cymbals carry the piece throughout its duration in a long farewell to the listeners.

Given the names involved and their reputation one would expect a more aggressive and noisy outing but everyone involved with the recording showed great amounts of restraint that fit this release's theme and intended mood perfectly. I'd be lying if I said I didn't want more from this quartet, more aggression, more physicality, but it's also obvious to me that they made exactly what they set out to make and I find it commendable. I'll definitely be listening any other release this quartet decides to put out in the future.

The album is available on black and clear vinyl, CD and digital download from Trost Records.