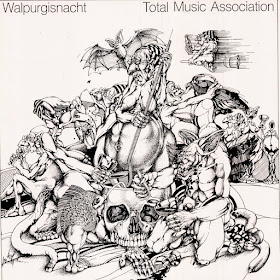 Total Music Association is another forgotten project of German free jazz of the 1970s made accessible by NoBusiness, the label that has also recently re-released the work of the Free Jazz Group Wiesbaden and that of the Modern Jazz Quintett Karlsruhe. The core of Total Music Association consists of members of that very Modern Jazz Quintett Karlsruhe, namely Helmut Zimmer on piano, Wilfried Eichhorn on bass clarinet and tenor saxophone, and Rudi Theilmann on drums plus Hans-Jörg Hussong on baritone and soprano saxophone, the head of the group, who is also responsible for the compositions. They are joined by Andreas Boje on trombone, Erich Schröder on viola and Matthias Boje on bass.

This disc features two sessions, a seven piece German avant-garde jazz ensemble recorded at legendary Ton Studio Bauer (where many early ECM sessions were recorded) in July of 1971 and three of the members recorded another one 16 years later in July of 1988, this time at Finest Song studios in Hamm. Like the two aforementioned groups, this band makes outstanding use of the freedoms offered by the new jazz of the time, without losing itself in them. The reason is that the band can rely on the excellent musical abilities of the individual members as well as on the group conception, which clearly puts musical communication in the foreground. Also, the musicians’ sensitivity as to sound and a pronounced interest in musical variety was obviously important. Similar to the basic conception of the Modern Jazz Quintet Karlsruhe, Total Music Association has a focus on the fusion of composition, musical form and improvisation, with the intention of crystalizing developmental processes. In doing so, it was no problem for this band to draw on the African-American jazz tradition. This becomes especially clear at the very end of the title track, when - after a chamber music-like, very free, atonal section - the musicians agree on a straight beat that is reminiscent of John Coltrane. Theilmann plays a driving, swinging rhythm, Matthias Boje quotes Jimmy Garrison, and the winds pull out all the stops and play wild lines. It’s a pity that this part is faded out.

All three pieces of Total Music Association are multi-layered thematic compositions, in which pre-conceived material and free layers interpenetrate each other, which is especially evident in the second piece 'Incubus - Succubus - Pestilentia'. Solos and the few existing collectives contrast with each other, whereby a certain closeness to new classical music is always recognisable. Several times all instruments drop out - except one. A solo is really then a solo. Hussong’s compositions are characterised by very independent, clear and free-tonal melodics, whereby the superimposition of layers of contrasting density is an essential compositional device.

Another aspect is that this album highlights typical aspects of how free jazz was produced in these days. In the very nice liner notes Hans-Jörg Hussong remembers how the album was made. He says that actually Peter Kowald was to play tuba and alphorn. "A single rehearsal was to take place on the evening before the recording date at the Jazzkeller Pforzheim. It came as a pleasant surprise that this rehearsal worked on the first run. But then a problem arose I hadn’t expected. Peter Kowald, at that time the only established professional musician among those involved, asked about the fee and where to stay." Hussong admits that he was completely naive because he thought that free jazz and money had nothing to do with each other. The money the band got in advance wasn’t even enough to cover the technical expenses - and Kowald left. Hussong had to adjust the music because of this new situation. That the group recorded such a wonderful record under these circumstances is an even greater effort.

Although many listeners are not familiar with most members of this spectacular project there’s hardly any doubt that this is another masterpiece of European free jazz that can compete with the finest work of - say - Peter Brötzmann, Alexander von Schlippenbach, Peter Kowald, Fred Van Hove, Rüdiger Carl and Ernst-Ludwig Petrowsky. Definitely not to be missed.

Walpurgisnacht is available on CD and as a download. You can order the CD directly from the label: http://www.nobusinessrecords.com or from http://www.downtownmusicgallery.com .

You can listen to the title track here:

This album was a treasure of a discovery for me. I wasn't familiar with the players, but it is fantastic. NoBusiness is doing an incredible job documenting the repressing great jazz from both Germany and Japan.

Thanks for the tip Martin, this CD now lives in harmony with my copy of the boxset from The Modern Jazz Quintet Karlsruhe!