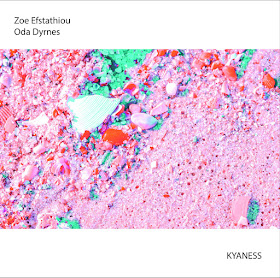 Kyaness, which comes out only on vinyl, is the duo of Zoe Efstathiou, a Greek expat pianist based in Sweden and Oda Dyrnes who comes from Norway and plays cello. Kyaness is a women’s duo, a fact not too often encountered even in the, supposedly, much more open field of experimentation. From the little I have discussed this subject with Zoe Efstathiou, I can certainly comment that she is preoccupied on all this. More on a later interview, I hope to believe.

Since some of us notice such things, one comment on the vinyl: Kyaness comes out as a thick one hundred eighty grams of vinyl which along the artwork and layout, make it a great buy…

It’s of great importance the fact that the quality of the sound is really-really good. Both musicians focus on their instruments as devices of making sounds, pushing them t their limits, allowing them to be something different than that they usually (and than their musical traditions want them to be) are. Both the cello and the piano are sounding objects and not just instruments that someone (technically articulate or not, it doesn’t matter) plays in the orthodox way. The focus in on the detail.

What I really enjoyed from listening to the risks both musicians took, is that they proceeded with the passion of the newcomer. They seem perfectly happy to challenge the instruments, so to challenge themselves and the years they have spent playing and studying. They play in unison, as a duo, and not like two individual voices that are able to cooperate. This is the trick, I believe. To be able to intertwine and interact collectively. The listener gets a unity of sounds out of this, when it never matters who is doing what. Apart from the aforementioned passion, they succeed in this not by luck, but by hard work, I believe, and a masterful approach to both instruments. No one ever said (or, at least, I believe so) that being technically advanced is a bad thing per se. It’s how and why you put your skills into practice.

Kyaness definitely falls into the category of experimental music. But again it’s how you do things that discriminates something new (a procedure which involves a lot of risk) than someone who only uses a word with some burden on it, but it’s just another mannerism. The recording and mixing by Egil Kalman manages to bring to life, like a live recording, all the micro-sounds and micro-moves: the reverberations of the inside of the piano, the micro-sounds of the bow and the strings of the cello, the sudden silences of the limited spaces occupied by the instruments.

Kyaness is one of the best electro acoustic recordings of the past couple of years for me. If you want to listen and buy it, go here: https://zoeefstathiou-odadyrnes.bandcamp.com/album/kyaness