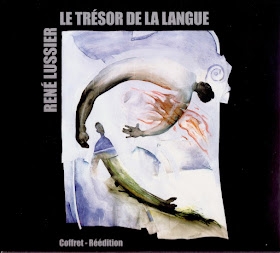 Le trésor de la langue (The treasure of the language) is a 3-discs box set reissue of one of the most ambitious and masterful works of Canadian, Québécois experimental guitarist René Lussier, originally released by Ambiances Magnétiques (a label Lussier co-founded) in 1990. This is a loving aural celebration, or “audio road movie sculpted in the heart of words” for the spoken French dialect of Québec, its unique and quintessential tones, melodic inflection, phrases and rhythms, depicting the importance of the language for the Québécois culture. Lussier commented recently in an interview with The Wire that his music “is fed with everyday life”.

The box set includes the original album, a live version with new arrangements, captured at shows at the Festival International de Musique Actuelle de Victoriaville and the jazz festival of Montréal, and few European festivals during 1994, and other live performances documented by filmmaker Fernand Bélanger and released as Le trésor archange in 1996. The three parts of this ambitious project were released by Lussier in 2007 but were out of print, until ReR’s Chris Cutler offered to rerelease all as a boxset, with notes by Lussier, the original liner notes by Robert Marcel Lepage, and notes on all three versions. This boxset is the second reissue of Lussier’s music by ReR, following Complètement marteau, released with Circum Disc earlier this year.

It is important to note that Le trésor de la langue is by no means favors Québecoise nationalism. The album includes poet Richard Desjardins’ "Qui s'en souvient?” (Who remembers it), relating to the demise of Native American societies by Spanish, French and English colonialism (“If I have the right to speak French or English? / From the bottom of my heart, from the bones of my body, / go ask the Iroquois / And hurry up while there’s still some”). Lepage refers in the liner notes to the Québécois French language as a “thorny issue” and relates to the heated events in Canadian politics in the seventies and eighties about separating Québéc from Canada as "poisoned snag" for the preservation of the language.

Obviously, an intimate knowledge of Québécois French would intensify the joy of experiencing Le trésor de la langue, but even without any knowledge of the French language, it is clear that Lussier has done a highly imaginative work. His sensitivity to the nuances in each syllable, word, phrase or inflection - taken from interviews with residents of Québec or samples of politicians’ interviews and speeches - transforms expressions into corresponding musical gestures, arranged and orchestrated as evocative and sometimes even shocking textures. Lussier was assisted in the live performances of Le trésor de la langue by Bob Ostertag, known for his sampling expertise, and even though Ostertag does not speak French he handled the spoken samples of Québécois French as sonic material, ready for free improvisations and hilarious coincidences. Other comrades in this project are fellow Québécois reeds player Jean Derome (another co-founder of Ambiances Magnétiques), Fred Frith (who played with Cutler in Henry Cow, and hosted Lussier in his Guitar Quartet), late cellist Tom Cora, among many others.

The self-taught Lussier is a one-of-a-kind guitarist with a compositional logic like no other, unbound by genre or style conventions. He is known for his sharp and boisterous sense of humor, and his infectious musical enthusiasm, all found with healthy doses throughout the almost three hours of Le trésor de la langue. For Lussier, the spoken Québécois French language is an extension of the daily soundtrack of our chaotic life, where contacts and jump-cuts are integral elements. He took these contrasts to some extreme detours and cast some of the influential politicians of the era into a circus-like sonic spectacle. For example, the French president Charles de Gaulle 's famous "Vive le Québec libre!" speech of 1967 and the recitation of the FLQ (Front de libération du Québec) Manifesto are matched with subversive and distorted arrangements that strip these pompous, strict speeches from its inflated, condescending importance. In the same manner, Lussier played and edited the melodic flow of the voice of Pierre Bourgault, a Québécois politician and foremost advocate of for sovereignty for Quebec from Canada, reduced the speed of his voice by half, thus emptying the pathos from this voice, and there are many more likewise sonic inventions.

Three decades after it was originally released, Le trésor de la langue may be experienced - for one who has never been to Québéc or speaks French at all, as a prophetic sonic document that rejects separationist and isolationist politics, despite its great love and intimate knowledge of Québécois French language. And, of course, a wild, uplifting sonic roller coaster.