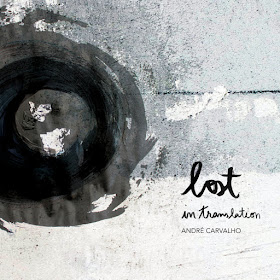 For his latest release, New York-based bassist André Carvalho fronts a drummerless trio with José Soares on alto and André Matos on guitar that, on three tracks, expands to a quartet with the addition of João Almeida on trumpet. The group produces a wide array of sounds and textures with plenty of space in between. An interesting comparison for the core lineup is the considerably more up-tempo 2019 release by the Michael Formanek Very Practical Trio with Mary Halvorson and Tim Berne ( reviewed on this site by Stephen Griffith ), though a closer sonic relative to the present recording is Melt, the recent release by Hearth ( reviewed on this site by Stuart Broomer ). While instrumental music is often described as atmospheric, here, the term is entirely apt; the concept of failed communication aside, these compositions often conjure up images of, if not gloom, at least foreboding along with somewhat less frequent moments of peace and beauty.

Carvalho’s previous release, Garden of Earthly Delights (2019), featured a larger ensemble (including Matos) and arrangements more dense, varied, and, as the title suggests, upbeat. Here, by contrast, the tones are subdued and contemplative, with one cluster of notes often being allowed to fade before another begins. The leader, equally adept with fingers and bow, tends to play a supporting role for Soares and Matos but also provides several tasteful solos.

Opener “Luftmensch” establishes the atmosphere, with the three instruments engaging in a tentative conversation punctuated by lulls and pauses. The clean guitar alternates between keening notes and arpeggios over plucked bass while Soares drifts and darts in between. On “Kilig,” the pace slows to a crawl with menacing distorted guitar and bowed bass with which the sax combines on occasion to create unusual harmonies. “Uitwaaien” maintains this atmosphere, though less gloomily, developing and resolving in a pleasant swirl of sound.

“Goya” changes things up with creepy bowing and menacing distorted guitar joined by jolts and sputters of trumpet marking Almeida’s first appearance, but the chaos gives way to strings of clearer notes before a fade-out of soft-blown sax and what sounds like electronics or echo. On “Alcheringa” and “Kalpa,” the guitar is once again clean and melts into the sax, and Carvalho provides a spacious solo in the former.

Almeida’s trumpet more complements the trio’s sound than expands it. On “Karelu,” he alternately plays off the sax and guitar before the quartet coalesces to sputter slowly to a halt. The brief “Murr-ma” showcases Soares’ gentle, breathy playing, while the equally brief “Boketto” showcases Carvalho’s bowing. “Mångata” begins with swells of bowed bass and stately guitar chords supporting Soares’s bird-like notes until the bowing gives way to plucking and the other instruments seem to float away. In “Resfeber,” chiming guitar notes open up into a cinematic blend of sounds before transforming into a smattering of harmonics. The brief “Wabi-sabi” provides a fitting ambient coda.

The “lost in translation” theme, Carvalho explains in the liner notes, represents an attempt to “embrace the unknown” through reflection on untranslatable words (hence the titles of the songs) and the universality of music. This recording certainly encourages listeners to approach improvised in a distinct way, facilitated in particular by the lack of a drummer, which allows the phrases to float and interact in a kind of timeless space. Carvalho may feel unable to say exactly what he means, but he communicates well this sense of restless exploration.