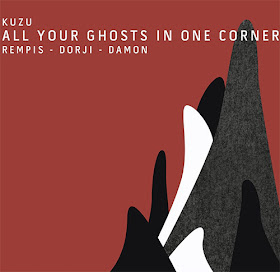 Expansion was happening in Kuzu's music before COVID shut the world down. The band was wrapping up a short U.S. tour right as the world's doors were being locked. The music that was created on the last two nights of that run, which the band members knew would shut them down for a long time, is documented on this disc. That openness, that expansion that was opening up their sonic world would be taken from them in a matter of hours – and often the anger, apprehension, and doubt about it all explodes in every direction. It's the sound of raging artists destroying their most advanced works in the face of an impending void because what the fuck does any of this mean now?

There is also a looseness that's not quite been this loose before. Yes, it's the comfort of playing with your brothers; but it's also the feeling of trying to ignore the tension that surrounds everything too. It's only relaxing on the surface when Tyler Damon does a lop-sided, lazy swing on the drum kit to Dave Rempis' slow reeding down the midnight 1970s Bowery sidewalk. Tashi Dorji throws in an occasional guitar pwang! while his amp buzzes. They're half of the Lounge Lizards on the nod. A little painful, but rest assured it hurts them more than it hurts you. It's the sound of DEPRESSION, full tilt. And then like Kaoru Abe waking up on a stage with a sax in his mouth, “Scythe Part 1” rips into the ether and then calms and then rips again, this time with a blinding, eye melting intensity that will have you feeling around your cheeks for blood and eye yolk.

“Part 2” doesn't provide much relief. Damon & Rempis sound like James Chance beating up Big Bird while Dorji chases 'em around with a hot fire poker. A drunk and bitter Tex Avery producing children's television. Dorji has the guitar fueled with far more distortion than Sharrock or anyone else even remotely associate with the word Jazz. He wrangles with an extra loose string underneath Rempis' overblown cries when things get winded. Out of nowhere, there's this image of Rempis thinking “fuck Chance; what if LYDIA played the sax?!?” Everything speeds up. The lights in the room get brighter, threatening to pop. But then the possession subsides a bit, with Rempis playing some sustained notes. The spirit trance hasn't been completely broken – and that becomes crystal clear when Rempis' fire music shoots through Damon and Dorji's house of mirrors like a flamethrower. Dorji's volume pedal dance combined with Damon's rapid clanging as the house burns down literally makes me dizzy.

At the point where Rempis is honking Morse code, Dorji plays with a radioactive device, and Damon beats the metal bowls covering the heads of electric chair death row inmates, it finally hits me that this is the most intense music the group has ever released. Then again, there is this artful spaciousness they've been crafting and attempting to present that nearly always precedes the chaos throughout. Maybe that's the reason the intense bits burn so brightly. Hard to tell. Even after multiple listens. Art reflecting the burning world, I guess. Hard not to do that when your ass is on fire. What you gonna do without your ass?

I couldn't agree more, Tom. The Lounge Lizards comparison for the first track puts it on the spot, the music is definitely looser and more spacious. Still, they play in a super tight way. The album is one of my favorites in 2021. One of the best band around these days. They are on tour in Europe at the moment, I hope they won't be shut down again. Check them out: https://www.daverempis.com/concerts

Thanks Martin. These guys pull a stunner every single time out. I hope they make it through the whole tour this time too!

There is a nice set with this trio, with some interesting abstract art in the background.
https://youtu.be/Dpyn5R6Ar7s

Kuzu is such a wonderful trio evolving with each new release. To my great regret, their autumn tour does not include Moscow.

Consistently, one of the best groups around. It's amazing, every Kuzu album as good as or better than the previous. Another great review, Tom, you really capture what's special about them.