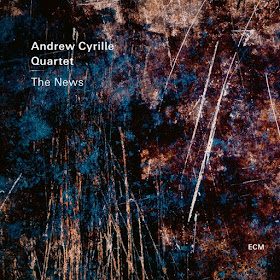 It's hard to overstate the number of seminal free jazz recordings drummer Andrew Cyrille has been part of, although the Cecil Taylor Unit’s 1966 Blue Note Unit Structures and Conquistador come quickly to most people's minds. But the 2019 octogenarian has been constantly active since then as a leader or sideman with a who’s who of major players. In 2016 he began a relationship with ECM with this quartet recording, followed by this trio date. The current quartet followed the sad demise of keyboard pioneer Richard Teitelbaum, leading to David Virelles assuming piano and synth duties that blend seamlessly with Bill Frisell’s guitar and Ben Street’s bass. Lee Rice Epstein perceptively pointed out that The Declaration of Musical Independence is a “spacious album...filled with longing and reflection” and the addition of Virelles augments that sound. Plus David is familiar with playing with Andrew and Street on his Continuum release from 2012.

On the topic of reflection, many of the songs apply new facets to previously recorded gems. The title cut was from a long out of print 1978 record on Ictus, The Loop, a solo drum album featuring sheets of newsprint covering the drum heads for “The News” and ending, in both versions with the leader simply stating “North East West South: The News" with his distinctive voice. Needless to say, even with the melodic nature of Andrew's drumming, the song sounds very different with the larger instrumentation, very disjointed sounds from all instruments perhaps reflective of the rapid-fire input from all directions to try to make sense of. But the underlying drumming has a similar skittering nature. An Adegoke Steve Colson composition, “Leaving East of Java” was previously recorded on Encounter by Trio 3, an early pre Intakt recording, now with Frisell and Virelles initially playing in unison to replicate Oliver Lake’s soprano sax lines before going their interlocking ways before a brief restatement of the opening theme. “With You In Mind” was performed by Cyrille, Henry Grimes and tenor saxophonist Bill McHenry, performing as Us Free, on Fish Stories. The original was structured after a love poem recited by Andrew over a cinema noirish tenor melody until Andrew’s brushwork and the bass join in at the vocal conclusion. The current version places the poem alone at the beginning followed by the full group joining in providing a lusher and more intricate sound than the lone tenor.

Frisell contributes three compositions, none of which I can find on prior recordings. “Go Happy Lucky” starts with a spritely guitar riff the title implies, under which dark brooding piano chords, similar to the start of Herbie Nichols’ “House Party Starting”, create dissonance before the two gradually resolve their differences in a fascinating way behind Street and Andrew’s solid foundation. Cyrille’s drumming has rarely been about ostentatiously dominating the group sound, even on his tribute to Art Blakey, as much as subtly enhancing it. This finely crafted release is no exception.