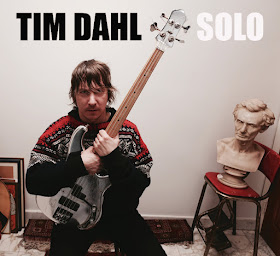 Here we have the debut solo long player from NYC bass ace Tim Dahl, who we last heard on GRID’s excellent 2020 meltdown Decomposing Force with Matt Nelson and Nick Podgurski. You might also recognize him from one of his many other ventures like the Flying Luttenbachers, Pulverize the Sound, Unnatural Ways, CP Unit, the Lydia Lunch Retrovirus, and assorted Weasel Walter assemblages. That sounds like a lot but it doesn’t really scratch the surface of the number of projects Dahl has lent his talents to. It goes without saying that he isn’t your prototypical improvising musician, mainly due to the breadth of sounds he’s conjured over the years and his willingness to play across styles and genres. That said no such stylistic breaches here, Dahl very much has his own thing going on. I’d also add that if you (like me) are a sucker for wild, driving, fuzzy electric bass we get it in spades on this long player. On Solo Dahl delivers us from the mundane with a blast of grimy, coagulated otherness that is as musically inventive and entertaining as it is visceral.

There are several short interludes featuring the studio banter from Dahl and producer Nandor Nevai which breaks up the listening experience and keeps you from taking any of this too terribly serious. That said I’ll leave the listener to explore these on their own. The first instrumental is the second track Crushed Globus, which finds Dahl chanting in alien tongues via vocoder, hovering in a maelstrom so dense it may have it’s own gravity field. On Tamu Massif the fuzz abates somewhat and we’re treated to a plunky, off-balance swill that maintains the strangeness of the previous track by transforming Dahl’s vocals into what I’d describe as some insectoid buzzing around the stereo field. Le_Anse aux Meadows is another heavy, hairy knuckled trans-dimensional trip through the pedal board, this time with a metallic cutting edge. Conversely, the song Essential Toxins sounds wide open, almost ambient, but not quite. Global Exit finds Dahl tinkering with a clean, clanging yet rhythmic pattern over some looped feedback. It meanders just a bit before the fuzz blooms and the frenzied currents start to eat at the eardrums. RBCNW sounds like a small space containing a tiny, malfunctioning Tim Dahl robot while Matsushita Electric has the sonic texture of electrified jagged rocks.

Schenectady doubles down on the jagged texture and Dahl’s mumbled, half sung, half spoken dialogue plays back through the haze. SAG almost gets into Merzbow territory but in a particularly pleasant way. Dahl’s bass hits like brass knuckles in a velvet glove while you have to deal with what sounds like screaming sonic fireworks ripping past your head. The track sputters and glitches out before swelling briefly and ultimately submerging. The Low Country is an unsettling echo chamber of stasis. F for Conduct reprises the dense texture study of Crushed Globus while cranking up the menace and intensity. The last track is the fantastically named Quantum Creep which concludes the album in a concise hunk of funky and satisfying energy. I’m a bit at a loss for touchstones on this one as I have been with most of Dahl’s projects, and I mean that as a compliment. It’s awesome and weird and out there and if you like any of the aforementioned projects it’s likely you’ll get a kick out of this too. All in all it’s intriguing mix of free improvisation, sludge, and Jerky Boys banter is sure to please the discerning fan.