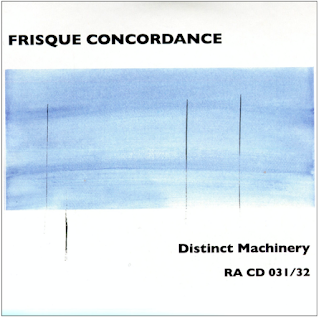 How far can you hide as musicians? How exotic and unknown should your next album be? How can you ensure that the fans won't find your next release? How can you be certain not to sell anything? The concept of "branding" seems like an alien idea to many avant-garde musicians, despite the obvious value it may have in gaining wider exposure and possibly revenue too, without having to compromise on the nature of their music.

(A second observation is that - despite our Blog's very narrow musical profile, and its positive attitude to new material - some artists never send us promo material in advance. Some labels send their material systematically, some not. Often we have to ask to receive material once we know that new releases have been published.)

Anyway, these observations may have their interest, but let's move on. The band "Frisque Concordance" will possibly not ring any bells to readers, as it did not to me. Its first album was released in 1993, and this is their sophomore album, yes, 28 years later, in 2021. And the quartet is a true superband, with John Butcher (°1955) on tenor and soprano sax, Georg Gräwe (°1956) on piano, Wilbert de Joode (°1955) on double bass, and Mark Sanders (°1960) on drums, with the rhythm section replacing Hans Schneider and Martin Blume compared to the first album. That's 257 years of combined life and musical experience in one band.

Of course the four musicians have performed together in different settings, and released albums in duos or trios (Gräwe & Sanders on "Affretando", Gräwe & Butcher on "Light's View", Gräwe with De Joode on "Flüchtigkeiten", De Joode & Butcher on "Low Yellow", and Butcher and Sanders many times (including "Daylight" and "Treader Duos", De Joode & Sanders on "Rope"), just to show how they fit in the same kind of musical universe of free improvisation.

Even if they perform only once every few decades, the quality of the music is exceptionally good. It is powerful, raw, intense, full of energy and forward-moving dynamics, and so is the quality of the recording itself. The four musicians give themselves fully, without hesitation or compromise. The first disc of this double CD was recorded in Vienna in 2017, the second was recorded for the Austrian radio at the Konfrontationen Festival in Nickelsdorf in 2018.

Obviously, Gräwe and Butcher have a stronger lead voice, but it must be said that both De Joode and Sanders shape the music in equal measure. All four artists are in great form for both performances. The music too varies between more intimate and quiet parts to high volume interactions and everything in between. This is one of those albums where the magic happens: the interplay is seamless, and the listening skills and co-creation of the four musicians is at the level that you might expect from their level of artistry and experience, and even more easily demonstrated by the mutual respect they have for each other.

For those of you - like me - not familiar with the word, "Frisque" means 'lively' and the band's name can be interpreted as "lively unity", a well-chosen moniker.

The live set is called "Desmodromics", referring to the workings of a four-stroke engine, alluding to power, speed, and seamless well-oiled interaction. A well-chosen title too. Actually, all titles refer to terms related to mechanics and machinery. Readers can have some fun by identifying their actual meanings on internet.

We expect their next album to be released in another 28 years from now, in 2049, when they will all be in their early nineties. I have no doubt the quality will be as rich as it is on this album.

Listen and download from Bandcamp.
There is a somewhat shaky video of that Konfrontationen concert, with poor sound quality, but at least it will an idea of the quality of the interaction.
Stef on Tuesday, November 23, 2021
Share