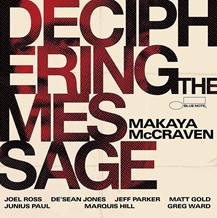 He has done it again: Over the past ten years Makaya McCraven has proven several times that he’s not only a jazz drummer who knows all the tricks of the trade, but also a very clever remix artist and producer. On the one hand, his own drumming mixes the styles of jazz heroes like Max Roach and Art Blakey with that of his father Stephen McCraven. On the other hand, when working with loops, he takes his cues from innovative DJs like J. Dilla and Madlib. What is more, McCraven likes to sample himself when organizing impromptu sessions around the world or when he’s invited as the guest star. He then edits the audio files several times to create contrasting moods.

Like on his Universal Beings album he uses classical jazz elements and enriches them with lots of funkiness and consistently develops the direct preliminary study for this album, his reimagination of Gil Scott Heron's last album We’re New Here Again (2020). On his new album he actually samples classics of the Blue Note catalogue but he doesn’t make the mistake to simply adore the achievements of the late greats. He hits the nerve of a younger generation instead because the music is viewed from the perspective of a newly added subjectivity (hiphop, drum’n bass). McCraven shifts the focus on the music’s novelty character, and thus it’s how it acquires a new musical relevance.

It’s interesting that McCraven chose recordings on which the later heroes were still on their way up. He said that he had wanted to focus on the older catalog and a particular era and that he had been inspired from the beginning by the idea of these young musicians going through bands, almost like a rite of passage. Focusing on this, McCraven also digs deeper in the concept of sampling within the context of traditional jazz - a method that has generally been a core aspect of his work.

The icing on the cake is the fact that the album has been so cleverly orchestrated that it feels like attending a concert at New York’s original Birdland jazz club. The trick is that McCraven uses announcements from the iconic Birdland MC “Pee Wee“ Marquette. McCraven says that he wanted to create a narrative that would give the listener the feeling of being transported back to that time or cultural movement. Thus, the album goes far beyond a simple stringing together of tracks. For all the love of sound tinkering, however, it's never too artificial or mechanical, as every pore of the album is imbued with a love of playing, collaboration and improvisation. In this way, McCraven also manages to seamlessly link the past of jazz with the present of this music.

Deciphering The Message is available as a download, on CD and on vinyl.