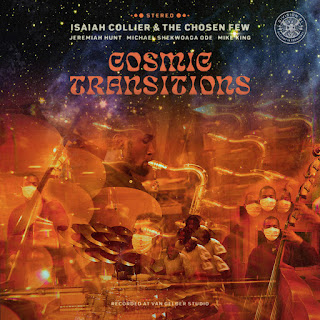 This album is outstanding. Cosmic Transitions is Isaiah Collier’s third album with his group the Chosen Few, after 2017’s Return of the Black Emperor and 2019’s The UNAPOLOGETIC NEGRO and it’s an instant classic, may be a masterpiece - only time will tell. That it was recorded on Coltrane’s birthday in 2020 at Rudy Van Gelder’s studio using the same equipment used for A Love Supreme should give you a sense of the guts Collier has. Though most true believers would shake in their boots at the thought of having to deliver anything substantial on such a day and in such a hallowed setting, Collier, pianist Mike King, drummer Michael Shekwoaga Ode, and bassist Jeremiah Hunt didn’t make the trip to kneel at the altar, they came to take up the torch and start new fires. The spiritual language of free jazz’s old guard is their native tongue. Not from, but of. This is ancestral music made manifest by a group of sonic shamans, and on four cuts across four sides Isaiah Collier and the Chosen Few show a bright path forward.

The album begins in a mystic way: the sounds of chants, shakers, bells and bowls signifying ritual and meditative communion, a christening in which the members of the band set to the task at hand. The momentum coils around Ode’s thumping entry before abruptly exploding into a disorienting burst of sound. The gravity of the piece takes hold, the pieces begin to fall in place then resolve into the soaring piano chords that kick off “Forgiveness”, and I’ll tell you what, I still get goosebumps. The long and elegantly hostile solos of Collier and King roil over an absolutely stellar rhythm section. On “Humility” the husky tenor line beckons a shift in the rhythm and King takes over, delivering his most spectacular solo of the set. His majestic play is countered by the organic volatility of Collier over the latter half of the track. Even during his most emotional and free passages he retains unbelievable control over his instrument. The track winds down into a solo from Hunt that serves as a bridge into the intro of “Understanding/Truth”.

Once the theme has been stated Hunt provides an interminable respite from the unrelenting squall with an articulate and rumbling solo that totters against the yielding piano harmonies and rustle of percussion. When King takes over he builds up the temperature slowly and subtly with airy chords, rolling glissando, and audible vocalizations which reach a peak as Collier restates the theme. The track dissolves from there into a shifting tonal field that Collier probes with soulful Ayler-esque strokes until the din fades to silence. “Mercury’s Retrograde” begins from this silence. Little noises at first, whistles and small horns that Ode quickly buttresses into a roiling clamor. Collier screams on soprano, then tenor, then both. The clouds part abruptly and the final piece begins to spill out. This last one features some of the quartet’s most intense playing, as if they are engorged with these sounds and simply can’t get them out fast or vehemently enough. Collier’s soprano conjures whirlwinds, you can hear the mechanics of the instrument struggling to shape his breath. Over the final three minutes Collier and Ode deliver a beat down of immense proportions, smashing skins and splintering reeds. The group restates the theme again and it’s done.

At this point I can almost assure that you’ll want to start it up again immediately. Perhaps like me you’ll have trouble processing what you just heard and excitedly, senselessly, and viscerally just want more. I had so many questions after that first listen, and I can tell you now that the answers lie within. To quote Angel Bat Dawid in her liners for the UNAPOLOGETIC NEGRO, Collier’s is “ A return of a sound…from a not so far present future space. A return to the ancient wisdom teachings of ascended masters .” Amen to that. Highly recommended.

... wow, thank you for presenting this record. I didn't know Collier before, but for now I'm in and I want more, so I will also listen to the previous releases ... it's a great pleasure to hear such a substantial music from a young musician. In any case 5 stars are more than justified, almost too little.

I never comment here, but thanks for posting this review, I am *really* enjoying this immensely, wish there was a CD release to add to collection.

Was beginning to wonder if you guys were gonna overlook this.

It absolutely smokes - what a record! - deserves much more attention.