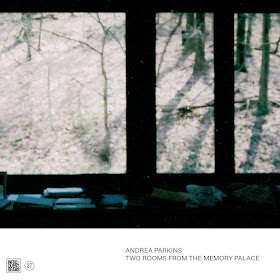 
Two Rooms from the Memory Palace is an immersive and poetic exploration of sounds in space, and time and in the listener’s sonic memory. American, Berlin-based sound artist-accordionist Andrea Parkins devised this multi-channel, multi-part generative audio installation to be diffused through adjacent acoustical spaces that sonically respond in real-time interaction, thus enabling shifting and sometimes startling sonic juxtapositions to take place. Parkins calls it an “investigation of tensions between the concrete and the ephemeral, and of slippages between phenomenological experience, memory and the poetic uncanny”.

The album re-imagines and captures the live, visceral impact of this work. The layers of supposedly random sounds create their interdependent, vivid and quite a tangible ecosystem. It seduces the listener to wander within the imaginary forking paths of this enigmatic sonic garden and is best realized in a dark room and with headphones. Two Rooms from the Memory Palace was premiered in 2015 at the New York Electronic Art Festival and was later site-adapted for Akousma Festival in Montreal as a performance installation for 40 loudspeakers in a single listening space. Later iterations of this work with its multi-pitched and slowly churning layers of electronic feedback have included a “Third Room”, an additional audio installation that acts as a subversive disturbance to the lush sonic world of the “Two Rooms”, with its random playlist of fragmentary sonic snippets from Parkins’ massive archive of recordings.