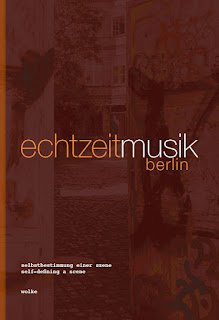 The 2011 416-page book, echtzeitmusik berlin: self-defining a scene , whose 10th anniversary we are using as an excuse to feature the music associated with the term, is edited by Burkhard Beins, Christian Kesten, Gisela Nauck, and Andrea Neumann and contains chapters on the history of the scene, the diverse theoretical and practical approaches in it, and critical perspectives on it from the editors, Toshimaru Nakamura, Rhodri Davies, Annette Krebs, Robin Hayward, Ignaz Schick, Lucio Capece, Werner Dafeldecker, Axel Dörner, Olaf Rupp and dozens of other practitioners. If it illuminates any throughline beyond geography, it is the breadth of people, perspectives, approaches, sound practices, and sound results and a consequent uneasiness in using a single term, echtzeitmusik, to encapsulate it.

It also exhibits a heightened self-awareness throughout the network of people. Players approach their practices critically, asking questions of ethics, what it means, how it means, and its relation to the collective and other aspects of life with real effects on their methodologies and thus real effects on their sound results. The critical compendium of the book stems from a series of 2007 roundtables called Labor Diskurs which itself stems from a 2007 discussion list called 27 Questions for a Start… from Trio Sowari (Beins, Bertrand Denzler, Phil Durrant). Some of these questions are: to what degree is this kind of music experimental; to what degree is this kind of music improvised; can this music help to stop global warming; is it easier to play than not to play; is failure one of our main sources for progress; do we listen differently to an improvisation than to a composition; does a recording turn an open process into a completed piece of work; is it possible to have a non-hierarchical group interaction. Transcriptions ofLabor Diskurs and the full list of 27 Questions for a Start with context and responses from a few people each have their own chapter.

As much as anything in the sound result or real-time responsiveness or common denominator in methods or even the location of Berlin, this kind of constant critical questioning might characterize what can be called echtzeitmusik. While common across experimental music, maybe in the constellation of other things it helps to define it. It surely makes the music more interesting.