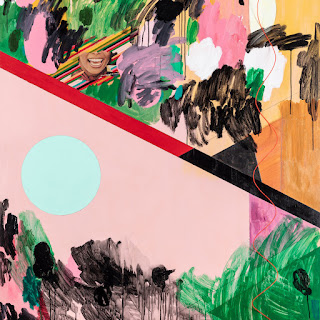 I’m a vinyl fan, as some of you might know. Sometimes the LPs I have bought contain download codes and I usually redeem them because I like to listen to music in my car as well. Since I’m a very neat and precise guy when it comes to music, I file the music in genres. However, with Ben LaMar Gay this has been especially tricky. Discogs says it’s Contemporary Jazz, for i-music it’s just Jazz and my record store pigeonholes him under Jazz/Fusion. But none of those categories ultimately hits the mark, as his music has traces of many genres. In principle, it can turn in every conceivable direction at any time - just when you think you have a piece nailed down, he comes around the corner with something surprising.

LaMar Gay’s second album for the hip International Anthem label is consequently called Open Arms To Open Us because this kaleidoscope is open to all sides. This already becomes obvious in the opener “Sometimes I Forget How Summer Looks On You“, in which LaMar Gay’s voice mixes with happy tinkling, drum’n’bass rhythms and the vocals of Ohmme (Macie Stewart and Sima Cunningham). The whole thing sounds like a kid’s birthday party on drugs. However, it’s actually still one of the more ordinary tracks on Open Arms To Open Us. Dorothée Munyaneza, who comes from Rwanda and comments the social situation there in her works, augments LaMar Gay in “Nyuzura" with a lament in her national language Kinyarwanda. Musically, it’s LaMar Gay’s bow to world music, which shines through in “Aunt Lola and the Quail“ again - a track in which jazz actually plays a role. The piece is the center of the album, as the musical spirits that often give the songs a mysterious aura are inspired by LaMar Gay’s aunt Lola. He recalls that she still heard the rhythmic beating of her father’s hammer in her head after he had died. As the beat of life, this rhythm carries itself symbolically into the here and now, as LaMar Gay uses it for his twisted grooves. On the other hand, the multi-instrumentalist is always aware of exaggerated idiosyncrasies and counters wacky passages with relaxed moments that work perfectly well even without postmodern music knowledge. “Bang Melodically Bang“ is based on top-notch hiphop samples, while “Oh Great Be the Lake“ is the song Robert Wyatt would have loved to write. Finally, a gameboy finds use in “I Be Loving Me Some Of You“ before Tomeka Reid’s cello battles with laughing gas voices in “In Tongues and In Groves“. Towards the end, Gira Dahnee and Angel Bat Dawid perform the short intermezzo “S'phisticated Lady“ snappily as a fake footage recording. We are dismissed with “We Gon Win“, a final nod to real jazz just when you might not have expected it anymore.

The compositions are mostly short, ranging from one to five minutes. Nevertheless, Open Arms To Open Us is a challenge because of its stylistic diversity - but like its outstanding predecessor Downtown Castles Can Never Block The Sun, this album is also worthwhile. And categories are smoke and mirrors anyway.

Open Arms To Open Us is available on vinyl, as a CD and as a download.

Thank you for covering this album -- your comment about kaleidoscopic opening really captured my experience. In addition to all the interesting things happening musically, I also feel abundant joy and warmth, a kind of heart opening. Really enjoyed this album, and wanted to put it on my year-end list. I know I'll be spending more time with it in 2022.